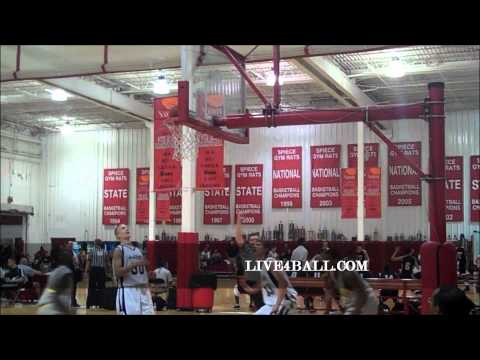 As the calendar rolls into June, we draw closer to one of the most important days on the Michigan basketball recruiting calendar: sophomore offer day. Because John Beilein adheres to the NABC guidelines for offering sophomores, June 15th will be the first day that the Michigan staff extends offers to class of 2013 prospects. In preparation for the big day, we’ll take a look at some of the main 2013 targets in a position-by-position breakdown.

One of those scholarships will almost certainly be tendered to a point guard. John Beilein loves to stagger his point guards two years apart and the impressive crop of 2013 floor generals fits that plan perfectly. The guards on this list have varying styles of play, whether true points or combos, but all of them would likely play an important role in the backcourt of Michigan’s offense.

Jackson isn’t the tallest of the guard prospects that Michigan is recruiting but he’s well built and explosive. Despite measuring around 6-foot, Jackson will go up and grab alley-oops but can also finish off of the dribble. He’s labeled a combo guard because he’s an impressive scorer, but he’s a capable passer and looks to create for others. He’s still looking for consistency with his jumpshot but he’s not a bad shooter, hitting five threes in a game I saw at Spiece. What truly stands out about Jackson is his relentless attacking style of play with the ball in his hands.

Michigan has told Jackson that he’s one of the top prospects on their 2013 recruiting board and he’s almost certain to earn an offer on June 15th. Jackson will attend Michigan Elite Camp on June 11th, Xavier on June 18-19th and unofficially visit MSU on June 21st

Walton is a pure point guard in every sense of the word. He doesn’t have the jumping ability of a player like Jackson but he uses his quickness to get into the lane and is a dynamic passer with incredible court vision. He looks to setup teammates but is also capable of exploding in the scoring column as well.

Jackson put up big numbers during his sophomore season and also had a strong spring and is ranked 91st by ESPN and 88th by Rivals.com. Derrick told us this spring that he thought a Michigan offer was coming soon and he’s made frequent visits to Ann Arbor, most recently on May 13th. The next unofficial visit on his schedule will be to Tennessee this weekend after attending Elite Camp there.

Flint Beecher native has already won his fair share of games, helping Flint Beecher to the Breslin Center. He was invited to ESPN’s Super Sophomore camp last summer and has played very well with Team Detroit on the Spring AAU circuit.

He’s a cat quick guard and true point that gets to the whole with ease. He’s undersized but a solid decision maker with a good feel for the game. He’s far from a selfish player, integrating seamlessly with a Team Detroit team that is loaded on talented guards. Morris visited Michigan yesterday evening and he plans to take three or four more visits this June.

James has risen on midwestern recruiting boards this spring after playing his high school ball away from the spotlight at Hope Academy, a small charter school in Chicago. James is about 6-foot-3 with a solid build and he certainly is under good instruction from Mike Mullins of the Illinois Wolves, who has previously coached Demetri McCamey and Evan Turner.

James has a good frame for a point guard and is strong with the ball. He’s a solid passer and looks to make the smart pass rather than the flashy pass. His game should take the next step as he learns to be more assertive and aggressive with the ball to create for himself. James has visited Ann Arbor and told us that he plans to attend Michigan’s Elite Camp on June 11th.

Physically, Matthews is the most impressive of Michigan’s 2013 guard targets (that have the potential to play the point). He’s around 6-foot-4 with great athleticism and a great first step. He’s not a natural point guard like Derrick Walton, and his jumper is streaky, but he has all of the tools to excel as his skills catch up with his athleticism. He’s an able passer but his game thrives around attacking the hoop.

Matthews was exceptional at Michigan’s Team Camp last summer but was lost in a shuffle on a talented and deep Romulus squad that played experience over potential. He’s played well for The Family this spring, earning spots in all three major services’ top 100 rankings: 36th on Scout, 83rd on Rivals and 45th on ESPN.com. Matthews has kept his recruitment relatively close to the vest but things should start to heat up this summer.

Watts is a power guard that gets to the hoop by bullying smaller and weaker defenders. The Flint native has draw comparisons to Mateen Cleaves and epitomizes the “Flint Stone” mold of guard. Big, strong and tough but at this point he’s more of a scorer, generally playing off the ball with Team Detroit. He has focused on becoming more of a well rounded point guard and it has shown in his play this spring.

He visited Michigan for the Northwestern game back in February and plans to take more visits this June. He hasn’t picked up quite as much buzz as some of the other guard prospects on Michigan’s radar, partially because he plays on a loaded Team Detroit team that has an ample number of options.

Disclaimers
1. “Mutual interest” is obviously subjective and visits were the primary metric used.
2. This board is far from a complete list and is just our best estimation of the situation as it stands today.
3. School lists are alphabetical.
4. If you have corrections, comments or additions don’t hesitate to e-mail me at dylan@umhoops.com.