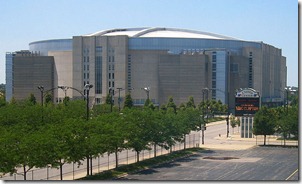 The Big Ten held its annual Council of Presidents & Chancellors meeting this afternoon and decided on venues for the conference championship games and tournaments in the new look Big Ten.

The Big Ten Tournament was originally hosted in Chicago before rotating between Chicago and Indianapolis from 2002 through 2008. In 2008 the conference announced a five year deal, which will run through 2012, to host the tournament in Indianapolis.

The Big Ten also announced that the football championship game will be held in Indianapolis until 2015. Full Big Ten release after the jump.

Park Ridge, Ill. – The Big Ten Conference announced today that the Council of Presidents/Chancellors approved a recommendation from university administrators for the cities of Chicago, Hoffman Estates and Indianapolis to rotate as the host sites for the Big Ten Football Championship Games and Men’s and Women’s Basketball Tournaments for a four-year period beginning with the 2012-13 academic year.

The Big Ten Men’s Basketball Tournament has been held in only two cities in its first 14 years of existence, including the first four years in Chicago from 1998-2001. Indianapolis first hosted the event in 2002 and the cities rotated as the home of the men’s tournament, with the Windy City hosting the event in 2003, 2005 and 2007 and the Circle City holding the tournaments in 2004 and 2006. The 2008 tournament marked the first of a five-year commitment to host both the men’s and women’s events in Indianapolis through 2012. Indianapolis has been the home of the Big Ten Women’s Basketball Tournament in 16 of the event’s 17 years, including the last 10 events at Conseco Fieldhouse.