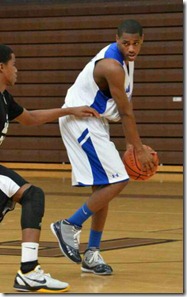 Flint Beecher point guard Monte Morris just finished up his sophomore year of high school and has already established himself as one of the best point guards in the state of Michigan. The 6-foot-2 guard led Beecher to the state semifinals last season and has put together a string of strong performances on the AAU circuit this spring with Team Detroit. Morris recently took a visit to Michigan and took the time to discuss the visit, his game and where he’s at with his recruitment.

On his game: Most people look at me because of my size. I’m a 6-foot-2 point guard with not that much weight, about 150-155lbs. So I just go out and play aggressive, play strong and lead my team. I try to get everybody involved and then get mine as well.

On areas he’s working to improve: My strength and how to score without the ball and coming off of screens. I lift every day of the week and just keep working on my strength.

On the main schools involved in his recruitment: Michigan, Michigan State, Xavier, Iowa, Georgetown and a little bit from Syracuse.

On scholarship offers:  Most likely schools will be offering me on June 15th. Schools haven’t specifically told me they will offer then but they have told me it’s more than likely they will and those are the main schools that I always talk with on the phone.

On any schools standing out: Not right now really. Everything is real cool and I haven’t narrowed things down.

On his visit to Michigan: It was really nice. I enjoyed the campus and the environment. I like the style that Michigan plays and I think it fits my game. I like the coaching staff and how they met my family and it was a nice little trip.

On what stood out on the visit: Everything really. Their new facility that they are working on now. I’m looking forward to that and how they’ve turned things around.

On the Michigan assistant recruiting him the most: Coach Bacari Alexander is the main assistant that I talk to and we get along really good.

On other visits: I’ve been up to Michigan State and I’ll have a couple visits in late June that I’ll take. I’m not sure where but I’m planning at least five.

On the main criteria for a decision: I won’t just go to a school because of its name. My mom is a basketball fanatic too so we’ll sit down and just look at the school. Who they’ve got coming in, how hard it would be for me to play right away and the type of style that they like to run. Do they fit my style and my career? That’s basketball and academics.

On the importance of staying close to home: That’s up and down right now. I went to the Super Sophomore Camp in Cleveland last summer and that was okay. I’m not the type to really get home sick far away, so in or out of state doesn’t really matter. But if I was in-state I’d be closer to home and my mom would be closer to me. It really doesn’t matter so we’ll just have to see.

On his fit in the Michigan offense:I think I’d fit really well. He [Beilein] likes his point guards to hold the ball for at least six seconds and try to set up something. They run a lot of pick-and-rolls and we run a lot pick and rolls at Beecher. I feel like I could be a good fit for that. They like to spread it out with no one down in the post and run the offense off penetration. Not a lot of sets, just playing basketball.

On a time frame for committing: My mom and I talked about that today. Probably around the end of my junior year basketball season I should be committed.

On Michigan Elite Camp: I’ll be at Elite Camp. I’ll be playing with my school this June and I know we’ll be at team camp up at Michigan at the end of June as well.