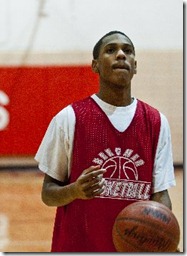 Michigan’s College Practice Camp was broken into two sessions: a morning session featuring underclassmen (2014 and younger) and an afternoon session featuring 2012 and 2013 prospects. Each session began with skill stations followed by situational drills (transition, three-on-three and one-on-one). The final hour of the day was made up of 8 minute five-on-five games split into 4-minute shifts. The entire day was fast paced with a heavy emphasis on skill development.

The field featured so many serious Michigan recruiting targets that we had to split the scouting post up. To begin with here are scouting notes on Monte Morris, Zak Irvin, Mark Donnal, Demetrius Jackson, Austin Hatch and Derrick Walton.

Morris’s squad was knocked off of the “Championship court” early but they managed to play their way back (by winning on court 1 and 2) before holding serve in impressive fashion to close the tournament. Morris managed to fill up the scoring column but he did it as a point guard that could score, not a scoring guard that could pass. Some guards need shots to excel, but Morris demonstrated that he can affect a game in a variety of ways.

He let the game come to him offensively. First by attacking the basket, using hesitation moves to get in the lane, and then by stepping back and knocking down a couple of jump shots. He ran the pick and roll very well and his confidence swelled as the night went on. The highlight of his night was a no-look pass in transition that led to a wide open three.

He showed off a very nice handle during Laval Jordan’s ball handling station and makes good decisions under duress. The most important thing for Monte is to continue to get stronger so that he can withstand the pounding that he’ll take at the next level.

The first thing that jumps out about Zak Irvin is his length. He’s probably 6-foot-6 with a long wing span and is a very smooth athlete.

His favorite move offensively is the pull up mid-range jump shot off of one or two dribbles, a shot that he can get almost whenever he wants. He needs to continue to improve his handle. At one point Javontae Hawkins caught him being careless with the ball and picked his pocket for an easy bucket in the other direction. As his handle develops, he should become more comfortable attacking the rim, rather than settling for the mid-range jumper.

Irvin has the tendency to defer a bit too much on his AAU team but was the closer for his squad in 5v5 play on Saturday. While he was on the floor, the offense seemed to run through him and he played with great confidence. He hit the game winning shot, a coast to coast driving layup at the buzzer, in the first game of the night and calmly sunk the game winning sudden death free throw in another.

The camp wasn’t loaded with big men but Donnal was the most impressive of the bunch. He has very solid footwork and makes the most of the opportunities provided to him, which can be few and far between in a fast paced camp setting.

Knowing how to play the game is often an overlooked trait for big men. Reading situations, rolling to the basket at the right time, pivoting the right direction and making the right move are reactions that have to be made quickly and that most young bigs struggle with. Donnal, like anyone, makes his fair share of mistakes but he seems to embrace coaching and make the necessary improvements quickly.

He had a nice dunk in 3 on 3 play and seemed to always make the right play every time. He’s not a jump out of the gym athlete or a tremendous shot blocker, although he did have a few nice blocks in full court play, but he has a good motor and is an above average rebounder. He showed off a strong drop step in the post on a couple of occasions but surprised me more with his face up game. He’s not going to be a true face-up four man at this point, or ever, but he’s surprisingly coordinated at putting the ball on the floor for a sophomore big. He’s also confident enough to step out and knock down a jump shot from 18-feet.

Active and strong, Jackson thrives when attacking the basket. He had a number of strong finishes through contact and over defenders. He’s not the tallest player but he’s probably the most athletic of Michigan’s point guard targets.

He has the bad habit of jumping to pass at times and also had a couple of sloppy turnovers on Saturday, but that’s a product of his aggressive style of play. His jump shot is streaky but he loves to shoot off of the dribble once he heats up.

His most impressive stretch of play was during a 3 on 3 session. He started 3 on 3 play attacking the basket, finishing over opposing big men like Andrew Zelis, but capped off the session showing off the jumper knocking down two consecutive triples.

At around 6-foot-6, Hatch has a solid frame to go along with his smooth and quick jump shot. He hit a pair of deep back-to-back threes during his time on the main court and had a couple strong takes to the basket – using his strength and body position very well. He appeared to be the most consistent shooter of the wings at the camp in both game action and shooting drills.

He did a good job on the glass and was assertive offensively without trying to do too much. His handle isn’t quite what you’d like to see out of a wing guard at the next level but it’s good enough to get in the lane and keep defenses honest. His dad has told us that he’s still growing and depending on how much he grows he should have a very interesting combination of size, strength and shooting ability.

Walton is most comfortable with the ball in his hands, pushing the tempo in transition. He’s the type of player that almost seems to move faster once he gets the ball into his hands. His pace seemed to be kicked up an extra gear during the full court scrimmages because he knew he had only four minutes of clock to work with.

Walton shot the ball very well in drills, especially from mid-range, and does a great job getting everyone involved during game action. While he shot the ball well off of the catch, he still needs to work on his consistency while shooting off the dribble.

Like any good point guard, Walton makes his teammates better by getting them the ball in positions where they can succeed. He has a good feel for the game with great court vision which, combined with his quickness and ability to get into the paint, make him a very tough guard.

Farmer is built like a tank and uses his strength to just overpower weaker defenders. At 6-foot-7 he’s a bit of a tweener; too small for a four and not quite quick enough to be a three. His best fit is probably the four position right now, but he did a solid job participating in wing drills throughout the day. He’s still a physically imposing player who’s future will be determined by how much he grows and how quickly his wing skills develop.