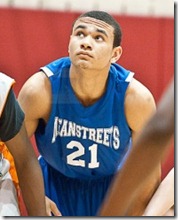 James has a very strong handle to go along with a solid frame. He was impressive in ball handling drills and plays the game under control. At this point he doesn’t seem to be quite as assertive and aggressive, or willing to take over a game, as Michigan’s other lead guard prospects. The next step in his development will be to add that element to his game, maturing to the point where he’s a constant creator and facilitator on the offensive side of the ball. If that confidence develops, it should be a scary combination because of James’s prototypical size and strength at the point guard spot.

Listed at 6-foot-7 on the camp roster, Beachem was one of the tallest wings in attendance. He might be even skinnier than his AAU teammate, Zak Irvin, but he does a much better job of driving the ball all the way to the basket. Adding strength will do wonders for Beachem’s game as it allows him to finish through more contact and grab more rebounds. His jumpshot is as smooth as his game and he continues to make strides in the right direction. Only has a Purdue offer at this juncture but should land several more as the calendar moves toward July.

Hawkins continues to do what he’s known for: make athletic plays and shoot deep threes. He showed off the ability to be a lock down on-ball defender against some of the most athletic prospects at the camp, most notably Marques Mondy and Zak Irvin. He hit an NBA range three on the main court but needs to continue to improve his consistency on his perimeter shot and also his handle. The next step for Javontae is to develop a mid-range game with the pull-up jump shot.

Hill, a consensus top 50 recruit, was one of the top ranked prospects at the event. He took an unofficial visit on Friday before participating in the camp on Saturday. He’s an efficient scoring wing that can be productive without taking opportunities away from his teammates. He never really got involved in the 5-on-5 games that I saw, but that was more because he was never passed the ball on the wing rather than anything he did wrong.

Mondy is a bit frustrating to watch. He’s a great athlete, with a strong build for a wing player and is a pretty good perimeter shooter as well. The talent and potential to be a great player is painfully obvious. He also just can’t seem to consistently produce as much as he should. He tends to drift on offense and prefers to settle to fire up a three rather than attack the basket. Mondy has so many tools that he could very likely blow up this July if he can string together a couple of strong tournaments.

Haney didn’t have his 3-point shot going in the games that I saw but he appears to be making a concentrated effort to diversify his game. He had a nice offensive rebound and a couple of solid takes to the basket on the main floor. He does a good job of playing under control and using his length to finish around the rim.

He has tremendous chemistry with his point guard, Derrick Walton, and knows how to find his shot whether by moving off of the ball or pulling up.

We’ve harped on Watts’s physical strength and it was very evident at camp on Saturday. While Walton and Morris use their elusiveness and quickness to get in the lane, Watts powers his way in and does a great job of finishing through contact. Similar to Demetrius Jackson, he’s still a scorer first at this juncture and I’m not sure that he makes his teammates better players as well as someone like Monte Morris or Derrick Walton.