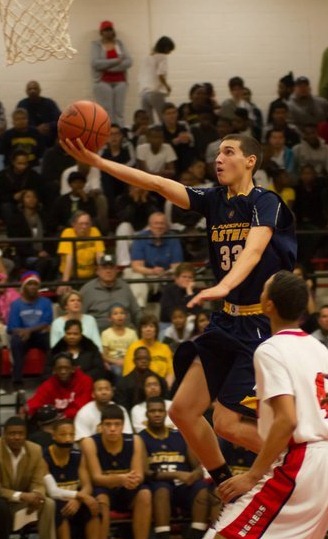 Steven Haney Jr. has been a familiar name to state of Michigan recruitniks since his freshman year of high school. A long skilled shooter, Haney has made a concentrated effort to diversify his game this spring. The rising junior is ranked 68th in the latest Rivals.com rankings and has picked up new interest from several schools in the recent weeks and months. Most recently he took an unofficial visit to Ann Arbor before attending Elite Camp over the weekend.

On his game: I’m known kind of as a shooter but have been working on more of a true shooting guard and improving my handle. I think I’ve been getting to the basket a lot more and getting to the free throw line quite a bit.

On whether any school is recruiting him harder than others: It’s pretty equal right now. Everyone is talking to me as much as they can and it’s been pretty even right now.

On his visit to Michigan last Thursday: It was really good. All of the coaches are really cool and they are good guys. It looks like the new facilities that are being built are really top notch.

On what stood out on the visit: The new facilities and their style of play stood out. I think I’d fit really well. They are recruiting me at either the two or the three spot where I could come off a lot of screens, ball screens, pick and rolls, catch and shoot, all sorts of different things.

On whether he’s discussed an offer with the Michigan staff: Yeah we’ve discussed it. They basically were saying that they are looking to evaluate a certain group of wings and I’m in that group.

On Elite Camp: I think I played alright. I think I definitely showed my improvement with ball handling and getting to the basket. I thought it was a great experience with all of the different drills and it was really like a real college practice.

On other visits: I went to Detroit last week and I’m going to Western this week. I’m also planning to go to Notre Dame, Boston College and Harvard

On the main criteria for a decision: Definitely a coach that puts academics first and also the opportunity to play against a top schedule.

On being recruited by in-state schools: Obviously Michigan and Michigan State are looked at as better programs because they are in the Big Ten but I definitely see the other in-state schools as being on the rise as well. I’m just looking at all options and open to everything.

On whether location is important: Really, location isn’t a big deal for me. I just want to find the right opportunity.

On a time frame for committing: Not really, I want to see how things go this summer and during my high school season. I don’t think I’ll be committing any time soon. To move that time frame up, I think something really significant would have to happen.