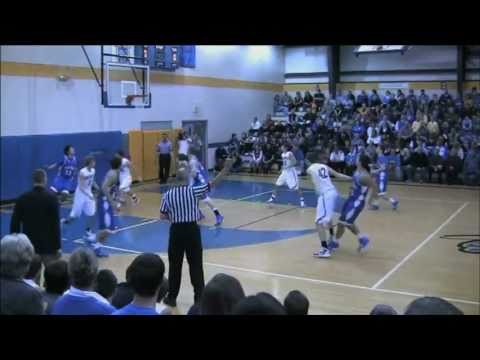 Austin Hatch just confirmed that he committed to Michigan this afternoon. Hatch delcared in April that Michigan was “probably No. 1”, today he made it official by verbally committing to John Beilein and the Michigan Wolverines. Hatch received an official offer from the Michigan staff on June 15th and didn’t wait long to make his pledge.

On his commitment: “I did commit! Coach Beilein is a great coach and Michigan’s a great school. They have a great program and there’s nothing there that’s a turn off. That’s about it”

Hatch is not ranked by any of the major scouting services but much of that is due to playing at a small high school in Indiana and missing the spring AAU season with a tendon injury in his ankle. Hatch was recruited hardest by Michigan but also received heavy interest from Notre Dame and Virginia among others.

Hatch averaged 23 points and nine rebounds per game as a sophomore, leading Canterbury to a 17-5 record and No. 1 IHSAA Class A state ranking at one point.

The first thing that stands out when watching Austin play is his shooting ability. His release is quick, efficient and consistent and he has great range on his jump shot. That’s not to say he’s one dimensional, Hatch is a strong rebounder and is able to use his strength to finish in the paint. Athleticism isn’t his strongest suit, and his defense is harmed by that, but he’s not a bad athlete.

Here are my full impressions of Hatch from his performance at the Michigan Elite Camp:

At around 6-foot-6, Hatch has a solid frame to go along with his smooth and quick jump shot. He hit a pair of deep back-to-back threes during his time on the main court and had a couple strong takes to the basket – using his strength and body position very well. He appeared to be the most consistent shooter of the wings at the camp in both game action and shooting drills.

He did a good job on the glass and was assertive offensively without trying to do too much. His handle isn’t quite what you’d like to see out of a wing guard at the next level but it’s good enough to get in the lane and keep defenses honest. His dad has told us that he’s still growing and depending on how much he grows he should have a very interesting combination of size, strength and shooting ability.

Hatch’s role in the Michigan program makes the most sense when you look at a scholarship breakdown. Over the next two seasons, Michigan will lose, Zack Novak, Stu Douglass and Matt Vogrich, three of the best shooters on the roster. There’s also the real possibility of Tim Hardaway Jr. entering the NBA draft. Michigan’s offense will continue to evolve, but there’s no question that the three point shot will be a pivotal element of John Beilein’s offense.

Hatch is a very capable shooter with size and strength. Adding him to the mix now doesn’t prevent Michigan from pursuing more options but rather provides an insurance plan allowing the staff to pursue more highly ranked wing targets like Zak Irvin and VJ Beachem or wait to see if players like Steven Haney Jr. take their game to the next level.

Hatch’s family also sent out this press release with more quotes on his commitment:

Canterbury’s Austin Hatch Commits to Michigan
Austin Hatch, the 6-6 rising junior from Canterbury High School has verbally committed to play basketball at the University of Michigan.

“My family, Coach Kline, and I are very excited about opportunity to play for Michigan. With a world class academic setting, the Big Ten Conference, great Coaching, and a winning culture, Ann Arbor fits perfectly,” hatch said.

“Coach Beilein has been wonderful in the recruiting process and Assistant Coach Jeff Meyer and I have made a great connection. I like their emphasis on faith, integrity, and team. They like my versatility and leadership.” he continued.

Michigan’s offense involves a great deal of movement, three point shooting, and player reads which fit well into Hatch’s skill set. The program has made great strides with last season narrowly missing the sweet sixteen in the NCAA tournament losing to Duke by just two points.

“I want to help Michigan return to Big Ten and National prominence so I’ll continue to put in the long hours,” Hatch added.

Concluding, Hatch said he wished to thank all those who have stood beside him including his family, friends and teammates, Canterbury School, and Spiece basketball.

“There is much work ahead and I thank God everyday for the ability to play basketball and the opportunities it provides me for education and beyond.”