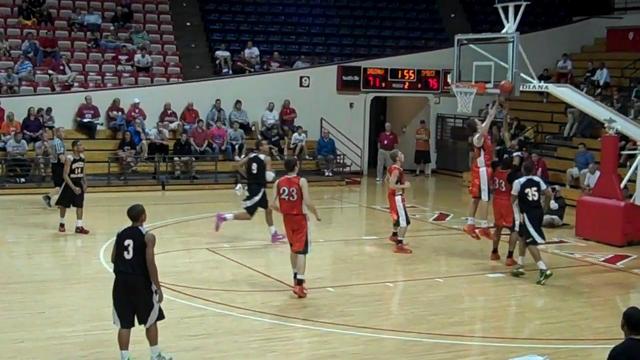 Donnal is a 6-foot-9, 200 pound big man out of Anthony Wayne High School in Whitehouse, Ohio that plays his AAU basketball with Dan Dakich’s Indiana Elite South squad. Donnal had a very impressive showing at Michigan’s Elite Camp and appears to be blossoming into an impressive prospect. Full video and scouting after the jump. Photo Credit: Herald Times Online

Donnal is ranked 81st in ESPN’s latest top 100 and rated a 3-star prospect by Rivals.com. Donnal’s top two options were Michigan and Butler but Michigan State and Indiana had begun to get involved in his recruitment.

Mark Donnal, Indiana Elite South 16u- The Ohio native bolsters things down low for the Dan Dakich coached Indiana Elite South team. Donnal has a good skill set for a big man, possessing the ability to knock down jump shots out to the 3-point line, and score with his back to the basket. The 6’9 forward also has a great motor and runs the floor hard on the break. Another great thing about the sophomore big man is his vision and ability to pass out of the post and find shooters for open looks. While Donnal isn’t an extraordinary athlete, he uses good timing and strong hands to corral rebounds and control the glass.

The camp wasn’t loaded with big men but Donnal was the most impressive of the bunch. He has very solid footwork and makes the most of the opportunities provided to him, which can be few and far between in a fast paced camp setting.

Knowing how to play the game is often an overlooked trait for big men. Reading situations, rolling to the basket at the right time, pivoting the right direction and making the right move are reactions that have to be made quickly and that most young bigs struggle with. Donnal, like anyone, makes his fair share of mistakes but he seems to embrace coaching and make the necessary improvements quickly.

He had a nice dunk in 3 on 3 play and seemed to always make the right play every time. He’s not a jump out of the gym athlete or a tremendous shot blocker, although he did have a few nice blocks in full court play, but he has a good motor and is an above average rebounder. He showed off a strong drop step in the post on a couple of occasions but surprised me more with his face up game. He’s not going to be a true face-up four man at this point, or ever, but he’s surprisingly coordinated at putting the ball on the floor for a sophomore big. He’s also confident enough to step out and knock down a jump shot from 18-feet.

Strengths:
Mark is an ever-improving big man in the 2013 class. He has good hands and good feet. He is a solid athlete that can play above the rim. He has developed a solid face-up jumpshot out to 17 feet which has really helped expand his game. He is a good rebounder and uses his big body well inside.

Weaknesses:
He doesn’t possess much of a low post game as he prefers to face up. When he does catch it down low it’s either a dunk or layup. He do well to add a jump hook, turn around jumper or up-and-under move. He’s not much of a shot blocker.

Bottom Line:
Mark has really come on in the last year (2011). He is improving by leaps and bounds as a player and a prospect. He’s becoming a priority for mid to high major programs in the midwest already. His added jump shot has made him a high major prospect.

Donnal is a great fit for the five position in Michigan’s offense. He can step out and hit a jump shot, put the ball on the floor at times and is comfortable running the pick and roll. He needs to continue to gain strength but with two years left in his high school career, he should step on campus.

Donnal’s freshman year will coincide with Jordan Morgan’s 5th-year senior season, giving him a year to play behind the experienced veteran. That’s important because all of the big men currently on Michigan’s roster – Morgan, Horford and McLimans – will be gone during Donnal’s sophomore season.