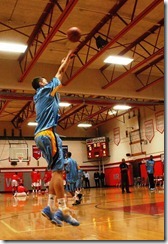 The last week was the biggest flurry of recruiting activity that we’ve seen since Nick Stauskas and Max Bielfeldt committed during the same weekend. Michigan hosted its Elite Camp over the weekend and landed a pair of commitments on Wednesday. With two more future slots filled, the recruiting picture became more defined, but the commitments also add an additional layer of complication to the overall recruiting equation.

Austin Hatch and Mark Donnal fill immediate needs on the projected roster. Hatch is a wing shooter with good size and strength that will set foot on campus after most of the current shooters on the roster (Novak, Douglass, Vogrich and possibly Hardaway) have moved on. Donnal is a big man that will provide size and skill in the middle, with a perfect offensive skill set for the five position in John Beilein’s offense.

Right now the Michigan staff is playing hardball. Taking Hatch and Donnal at this juncture means a couple things, first Michigan really liked both kids – a lot. This is the earliest that John Beilein has even taken a commitment, going off of data from the past decade at Michigan and West Virginia, and the U-M staff clearly wanted to secure both kids before they potentially shot onto the recruiting radar in July.

It’s also necessary to point out John Beilein’s track record when evaluating prospects that have attended his Elite Camp. Glenn Robinson III was considered a second-tier prospect in the state of Indiana but impressed Beilein at Elite Camp and picked up a scholarship offer, since then he’s exploded into to a top-75 player. Tim Hardaway Jr. impressed at Elite Camp and committed shortly after, two years later he was one of the top freshmen in the Big Ten. Hatch and Donnal aren’t likely to explode into the top-50 but it’s a reassuring feeling to know that Beilein has had an opportunity to evaluate and interact with them at camp. Now that’s not to say that Beilein uses the six hours at his camp as the only evaluation tool, he’s been down to watch Hatch and Donnal play with their high school squads on many occasions over the last year.

The early commitments also mean that the staff wants to lock up a third commitment sooner than later. Donnal and Hatch create a scholarship crunch and you can bet that the Michigan coaches have informed other targets what that means. If Morris, Walton or soon Jackson want to come to Michigan, they’ll have to seize the opportunity sooner than later. Michigan State executed this strategy to perfection last August when the Spartans landed three commitments in under two weeks. This inevitably leads us to the point guard position, and yes Michigan will take a point guard in this class. John Beilein offered two point guards a scholarship on Wednesday, Monte Morris and Derrick Walton, and a third offer to Demetrius Jackson could be on the way shortly.

Both in-state prospects, Morris and Walton, have impressed this spring, played well at Michigan’s Elite Camp and have Michigan at or near the top of their lists. Will one of them jump on the scholarship? Right now they are holding steady and Michigan State has jumped into the mix by contacting both players. More importantly, Walton reports that the Spartans are on the verge of offering him a scholarship, a move that will undoubtedly further complicate his recruitment.

The x-factor is Demetrius Jackson. The explosive guard is more of a combo and lacks some of the pure point guard skills of Walton and Morris, but he might have the best long term potential of the trio. Beilein told Jackson that he wanted to get him down on campus before taking the next step — offering a scholarship. Jackson is working on scheduling that unofficial visit, likely in the next couple weeks, and an offer should be extended at that time.

As for the other outstanding offer, to wing guard Zak Irvin, we expect that situation to drag out much longer. Irvin is very interested in Michigan, but appears to be in no hurry to make a decision. He doesn’t have any visits set at this juncture and will continue to take his time while going through the process. Expect Michigan to be very involved in his recruitment until the end.

There’s also the option of adding to the class of 2012… We talked to Stefan Jankovic (pictured) a couple weeks ago, a face-up four man that’s interested in Michigan and considering a visit. Gary Harris is more of a long shot option, who recently stated that the five schools recruiting him the hardest were: Indiana, Michigan State, Louisville, Purdue and Michigan. Michigan coaches continue to pursue Mitch McGary in attempts to get him on campus for a visit, but almost every other high-major program is pursuing McGary as well. Jankovic is the most likely option here, as he plans to take an official visit this fall, while Harris and McGary remain long shots.