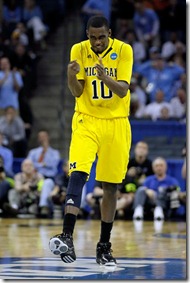 Hardaway participated in four try-out sessions over the last three days and survived the cut from 20 down to 13. Team workouts in Colorado will continue throughout the week, and there will be one more cut (Jeff Goodman reports this is down to Keith Appling or James Bell) before the team leaves for Europe on Friday. The first stop will be in Lithuania where Team USA will practice and scrimmage against the Lithuanian U19 and U20 National Teams. From there, the team will travel to Latvia for the 2011 FIBA U19 World Championships which will run from June 30th through July 10th.

The USA youth program has been very successful in recent years and several college stars have improved after participating. The 2009 team featured players like Gordon Hayward, Shelvin Mack, Klay Thompson and Ashton Gibbs, all of whom had good freshmen seasons before elevating their games to another level after returning.

Two other Big Ten players made the cut, Keith Appling and Meyers Leonard, while Iowa sophomore Melsahn Basabe wasn’t so fortunate. Find the full Team USA U-19 Roster and a collection of links to further reading material after the jump. (Photo: Steven Maikoski/USA Basketball)