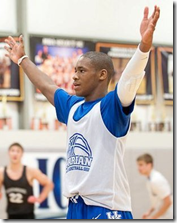 Glenn Robinson III traveled to Charlottesville, VA to participate in Dave Telep’s annual NBPA Top 100 Camp. Playing well on the AAU circuit is one thing, but playing well against arguably the 100 best players across the country requires a different level of player.

For Robinson, it was an up and down experience but he held his own. The 6-foot-6 forward averaged 6.3 points per game at the camp with single game highs of 12 and 14 points. Despite the up-and-down nature of his play, Robinson still earned a positive shout out from Rivals.com:

The Michigan commitment continues to improve. He has the potential to be a high-level wing scorer who can score points off moves and also grind out points around the basket.

Robinson continues to cement his status as a borderline top-50 evel recruit and seems to improve his game at each stop this summer. His improvement over the last 12-months has been impressive and Michigan fans should continue to be excited about his game if he can maintain a similar rate of improvement.

Also at NBPA Camp, the gregarious and energetic Mitch McGary put on a show, continuing to establish himself as one of the top prospects in the country. There continues to be talk of the Michigan staff getting McGary on campus for a visit, something that he seems open to, but McGary has not officially set any visits at this juncture. McGary has plenty of connections to Michigan as it was Zack Novak that noticed McGary’s potential in high school ($) and he plays his AAU ball with Glenn Robinson III. (Photo: CatsPause.com)

Austin Hatch didn’t sit around at home after committing to Michigan on Wednesday, he traveled to Portland to participate in the Rose City Classic with the Spiece Indy Heat.

Justin Young pointed out Hatch as a “John Beilein guy” which he defines as so:

You hear about John Beilein players. They fit a mold. They are usually good shooters, hard-nosed players and guys that know how to play.

In a early round win over ICP Portland, Hatch scored a team high 13 points and “earned his buckets from a variety of spots on the floor” according to Oregon Live. Spiece finished fourth in the tournament with a narrow loss on Sunday evening.

Demetrius Jackson (pictured) picked up an offer from Xavier after participating in their team camp. He’ll be busy over the next several weeks with a visit scheduled to Michigan State next week followed by Michigan and Indiana the following week.

Iowa State offered Monte Morris. Derrick Walton informed us that Michigan State was close to offering him but that offer doesn’t appear to have been extended yet. Walton also has a scholarship offer from Xavier.