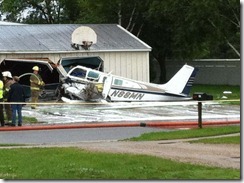 2013 commitment Austin Hatch and his family were involved in a tragic plane crash Friday evening near Charlevoix, MI.

The Indiana News Center is reporting that Austin’s father, Stephen Hatch, and his wife Kim were killed in the crash while Austin survived the accident and has been hospitalized in Traverse City in serious condition.

This is the second time that the Hatch family has been involved in a plane crash. In 2003, Stephen Hatch was piloting a plane from Michigan to Fort Wayne which clipped a power pole. Austin was eight at the time but survived the crash. His mother, Julie, 11-year old sister Lindsay and 5-year old brother Ian were killed in the first crash. (Photo: Petoskey News)

Update: Here’s the latest on Hatch’s condition from the Indiana News Center, via a family friend:

“I got off the phone with a good friend of ours, Dr. Bob VanHorn, and he and his wife Renee were at the hospital today. Bob said that they had induced coma and he’s currently resting comfortably. He does have some broken bones. From what Bob told me, he’s got some broken ribs and clavicle. He did fracture his leg, but he said that there’s nothing that needs to be done as far as casting or pins, that type of thing. Both of his lungs are punctured from what I understand, but they’ve got that under control. The most important thing right now that they’re monitoring is that he has a fractured skull and he has some swelling on the brain.”

“We are saddened to hear about another tragedy that has affected the Hatch family,” said Beilein. “Austin needs as much support right now as possible and I know he will be in the thoughts and prayers of the Michigan family during this difficult time.”

Our thoughts and prayers are with Austin and his family.