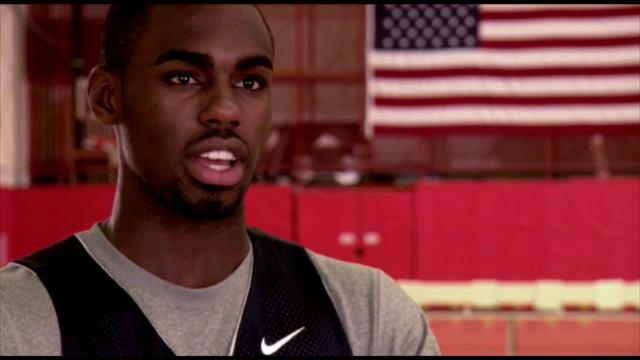 The USA U19 World Championship team played its first exhibition game in Europe this afternoon, falling to Lithuania’s U20 squad. The American squad showed signs of jetlag as they fell behind 32-8 in the first quarter, while shooting just 2 of 15 from the floor. After managing to cut the deficit to 72-55 through three quarters, Lithuania pulled away in the fourth and won the game by a final score of 101-72. (Photo: USA Basketball)

Tim Hardaway Jr. had 18 points in the loss with 16 coming in the second half. He was the leading scorer for Team USA and converted on 7 of 18 field goal attempts (2-8 3pt), grabbed four rebounds and handed out three assists. (Box score)

Highlights and more details after the jump.

Team USA will participate in one more exhibition game, versus the Lithuanian U19 squad, on Tuesday before traveling to Latvia for the FIBA U19 World Championships. USA’s group includes China, Egypt and Serbia and the Americans will open against Egypt on Thursday.

Here’s a compilation of video clips released by USA Basketball from training camp in Colorado, including some quotes from Tim Hardaway Jr. and head coach Paul Hewitt.