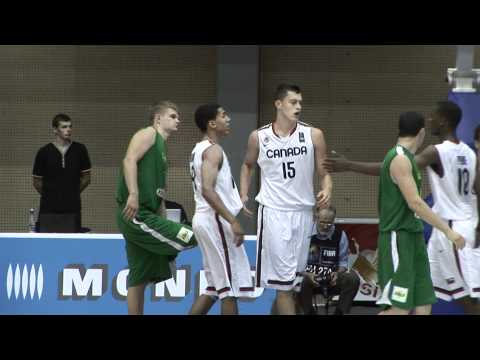 The July recruiting evaluation period begins on Wednesday as Division I college coaches will board airplanes, get behind the wheel of a rental car and travel to gyms across the country to watch AAU basketball. Over the next month coaches will end up in Philadelphia, Las Vegas, Los Angeles, Akron, Augusta, Orlando and just about everywhere in between. Contact between recruits and coaches at games is impermissible, so the only actual recruiting that the Michigan coaches can partake in is wearing a maize polo shirt proudly and sitting on bleachers for 13 hours per day. Here’s a breakdown of where to find both Michigan commitments and recruiting targets over the next 30 days.

Glenn Robinson III (2012)
AAU Team: SYF Players
Schedule:  NY2LA Next Level Invitational (Milwaukee, WI, 7/6-7/9), IBCA Top 100 (Indianapolis, 7/11), NY2LA Summer Jam (Milwaukee, WI, 7/12-7/15),
Outlook: Robinson played very well this spring and plenty of eyeballs will be looking his direction this summer because he plays alongside top-10 recruit Mitch McGary. Robinson is ranked anywhere from 46 to 90 by the major national sites and this July will likely determine if he’s a top 50 or top 100 player when all is said and done.

Nick Stauskas (2012)
AAU Team: Grassroots Canada
Schedule: RBK Breakout Challenge (Philadelphia, PA, 7/5-7/9), Hall of Fame National Invitational (7/10-7/12, Springfield, MA), Fab 48 (Las Vegas, NV, 7/22-7/26), Duel in the Desert (Phoenix, AZ)
Outlook: Stauskas is playing for respect. After a strong junior season at St. Mark’s, Stauskas missed the spring with a lingering knee injury. Because he was unable to play, he missed out on invitations to several prestigious All-American camps – NBPA Top 100 and the Nike Skills Academy – and didn’t have the opportunity to advance in national rankings. Stauskas is healthy again and has made it clear that he’ll be on a mission to prove his abilities this July.

Mark Donnal (2013)
AAU Team: Indiana Elite South
Schedule:  adidas Invitational (Indianapolis, 7/6-7/9), Kentucky Hoopfest (Louisville, KY, 7/9-7/12), Best of the Midwest (Indianapolis, 7/13-7/15).
Outlook: Donnal burst onto the national radar this spring and committed to Michigan before most coaches knew much about him. His national profile could follow a similar trajectory – unknown player to top 100 – as Matt Costello’s did last summer, with the obvious difference that Costello committed in August not June. As it stands, Donnal is already rated as a top 100 player by Scout and ESPN, will his stock continue to trend upwards?

Austin Hatch (2013)
AAU Team: Spiece Higher Level
Outlook: Our thoughts and prayers are with Austin as he recovers from the plane crash that his family was involved in. Make sure to view his Caring Bridge page for the latest on his condition.

Derrick Walton
AAU Team: Michigan Mustangs
Schedule: adidas Invitational (Indianapolis, 7/6-7/9), Brawl for the Ball (Grand Rapids, 7/12-7/15), adidas Super 64 (7/22-7/26)
Outlook: Walton is one of three guards with a Michigan offer and he has the Wolverines at the top of his list for now. A strong July could propel Walton into more offers, Michigan State is one team that is close to offering, but he is currently planning an August Decision.

Demetrius Jackson
AAU Team: MBA 2013
Schedule: adidas Invitational (Indianapolis, 7/6-7/9), Kentucky HoopFest (Louisville, KY, 7/9-7/12), Arch Invitational (St. Louis, 7/22-7/25), GRBA National Championships (7/29-7/31)
Outlook: Jackson is still developing into a pure point guard but has impressed schools across the midwest with his potential, athleticism and aggressive style of play. Michigan and Xavier have offered and the Wolverines are in a very good position. With a couple strong performances this July, Jackson could see his offer count increase rapidly before the month is over. He recently told us that he plans to take his time but it will be interesting to see how things develop in the coming month or two.

Monte Morris
AAU Team: Dorian’s Pride
Schedule: RBK All-American Camp (Philadelphia, PA, 7/5-7/9), D1 Elite (Chicago, IL, 7/9-7/11), NY2LA (Milwaukee, WI, 7/12-7/15), Super Showcase (Orlando, FL, 7/21-7/25), AAU Nationals (7/26-7/31)
Outlook: Like Walton, Morris has named Michigan his leader at this point. He’s high on the Wolverines and will have a decision to make at the end of July  – do I commit to Michigan now or wait, knowing that the U-M option might not be there in six months? – that decision could be impacted by how Morris plays this July. Morris, like many other former Team Detroit players, will be playing with Dorian’s Pride this summer and will also participate in the RBK All-American Camp. He has a visit planned to Syracuse at the start of August and he is among the top three or four Michigan targets to keep an eye on this month.

Zak Irvin
AAU Team: Eric Gordon All-Stars
Schedule: adidas Invitational (Indianapolis, 7/6-7/9), IBCA Top 100 (Indianapolis, 7/11), Best of Midwest (Indianapolis, 7/13-7/15), Adidas Super 64 (Las Vegas, NV, 7/22-7/26)
Outlook: The Hoosier state applies more pressure on its young talent than any other state. Two of Irvin’s AAU teammates committed to Indiana last fall while he’s opted to take a slower approach to the process. Rumors swirled surrounding a potential pre-July commitment but Irvin has reiterated that he won’t decide until August, at least. Irvin’s stock has fallen a bit in the last year (he was once regarded as a top-50 kid) but a strong July could see him push back up in the rankings.

VJ Beachem
AAU Team: Eric Gordon All-Stars
Schedule: adidas Invitational (Indianapolis, 7/6-7/9), IBCA Top 100 (Indianapolis, 7/11), Best of Midwest (Indianapolis, 7/13-7/15), Adidas Super 64 (Las Vegas, NV, 7/22-7/26)
Outlook: Beachem, Irvin’s AAU teammate, is a player that many Indiana scouts will tell you has the most potential in the state’s 2013 class. With a similar build to Irvin, Beachem is probably more athletic and has offers from Butler and Purdue. He camped at Michigan for Elite Camp earlier in June and his offer list should grow quickly this July. Michigan extended several offers in June, but Beachem is one of the main prospects that could play his way into a new Michigan offer.

Sherron Dorsey-Walker
AAU Team: REACH Legends
Schedule: adidas Invitational (Indianapolis, 7/6-7/9), D1-Elite (Chicago, 7/9-7/11), Brawl for the Ball (Grand Rapids, 7/12-7/15),  Adidas 64 (Las Vegas, 7/22-7/26), Double Pump Best of Summer (Anaheim, CA, 7/27-7/30)
Outlook: Sherron and Nick Stauskas received Michigan offers last fall in what was seemingly a one or the other situation. Stauskas jumped on the offer this spring and most wrote off the potential pairing of Michigan and Dorsey-Walker. The prospect of Sherron playing the one arose after a recent unofficial visit and Michigan appears back in the mix as Dorsey-Walker plots an August decision.

Stefan Jankovic
AAU Team: CIA Bounce
Schedule: FIBA U19 Worlds (Latvia 6/30-7/10), Nike Peach Jam (Augusta, GA, 7/12-7/15)
Outlook: Jankovic is currently playing at the FIBA U19 Worlds, the same tournament that Tim Hardaway Jr. is at, where he is averaging five points and three rebounds per game and did this to Jonas Valanciunas:

Jankovic appears to be the prototypical four-man in John Beilein’s offense with his shooting ability. Playing at the premiere AAU event of the month, Jankovic will have plenty of eyeballs in his direction.

Mitch McGary
AAU Team: SYF Players
Schedule: NY2LA Next Level Invitational (Milwaukee, WI, 7/6-7/9),  NY2LA Summer Jam (Milwaukee, WI, 7/12-7/15),
Outlook: McGary established himself as a top 10 prospect this spring and you can bet that the biggest schools in the country will be focusing on him this July. Maryland is recruiting him the hardest and he’s visited schools like UConn and Kansas, but most recently he took a trip to Michigan. A high energy five man with some perimeter skills, McGary would be a major coup for John Beilein and his staff.

Note: Don’t hesitate to e-mail me if I’m missing an event on a player’s schedule.