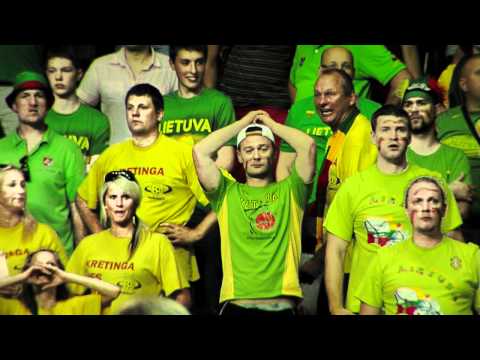 After being dominated in two exhibition games versus Lithuania’s U19 and U20 teams, Team USA got some revenge with a second round overtime victory over Lithuania’s U19 squad. Team USA marched out to an early lead and led throughout until Lithuania made a nine point fourth quarter comeback to send the game to overtime. Carrying that momentum into the extra period, Lithuania opened up a six point overtime lead but Jeremy Lamb proved to be too much for Lithuana to handle. Lamb scored 35 points including a turnaround game winner with 2-seconds remaining.

Tim Hardaway Jr. had 10 points on 3 of 5 (0-1) shooting, two rebounds, an assist, steal and two turnovers in 17 minutes of play. Hardaway battled some foul trouble throughout but did have a monster first half alley oop dunk in transition (above).

Team USA is now 5-0, having cruised to an 83-54 victory over Canada yesterday. Hardaway had 3 points on 1 of 5 shooting in that game. The Michigan sophomore is the team’s fifth best scorer and is averaging 8.8 points, two assists and one rebound through five games.

Here are some post-game quotes from Hardaway (via USA Basketball):

How fun was that game?
That was a fun game. It was really fun to just come out there and get a win in front of their home crowd. Just to come out here and have fun and do it in a tough way was great.

What’s it say about this team to come from a week ago when you lost to Lithuania by a lot in an exhibition game to playing them much better and winning?
It says our team is growing as days go by and everybody is giving Coach Hewitt what he wants out of us. We’re just going out there and executing what he wants and the game plan that he wants

What things does this team still need to work on?
Just the Xs and Os. We have a good chemistry going on right now, but we had a lead today and we didn’t take care of it. So if we can just stay up on our leads and get our opponents out early I think we’ll be in great shape.

Could you compare this to a Big Ten game?
Oh yeah, it was physical and competitive. I’d say it’s more like a Michigan State game at East Lansing; how we were hearing the home crowd, they had a big section where they had their fans and we were outnumbered. We’re out of the country so we knew to expect that and we just had to come out here and give it all we had.

The Americans will conclude group play versus Croatia tomorrow at 7:30 a.m. ET and quarterfinal action will begin on Friday, July 8th. Game from the quarterfinals onward will be streamed on FIBATV (for a fee).