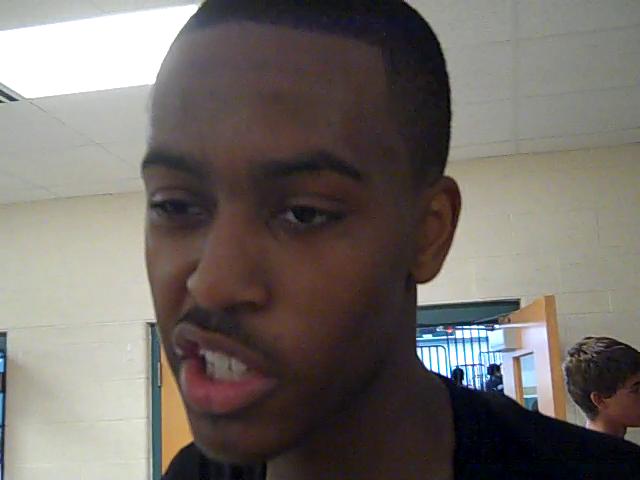 VJ Beachem continues to play well on the AAU circuit and most recently picked up an offer from Butler. The 6-foot-7 wing forward took the time to discuss his recruitment at the Adidas Invitational where he was watched closely by John Beilein, Lavall Jordan and a host of other coaches.


Full transcript after the jump.

Can you just tell us where you’re at as a team and how you’ve progressed from April to July?

One of the things you mentioned in the spring was that you needed to work on rebounding. You were very aggressive on the glass here, talk about your progression.

I spent a lot of time being the biggest guy on the floor during June so that made me rebound. Now I’m coming out here and I have to rebound to help my team.

Where are you in the process? I would say that it’s starting to speed up a little bit. After July, I think that it will speed up a little bit more. But I’m still taking my time for right now. [August] is probably when I’d make my decision. I don’t think it would be a whole lot longer before I’d make it.

Are you going to cut it down or just decide when it’s right? When it’s right. Whenever I feel it’s the best thing, and I’m comfortable, that’s when I’d make it.

Do your teammates prod you a little bit one way or another?

Do any schools stick out as a favorite or that are recruiting you the hardest? I wouldn’t say I have any favorites but I do have some that stick out. Indiana, Purdue, Butler,Notre Dame, Xavier, Michigan, Michigan State, Ohio State and I really like Florida even though they are far away.

Does it matter going far away? Of course I would love to go to a place where my parents could see me play all the time but it wouldn’t be my number one factor.

Joe Eberhardt is an Indiana-based prep scout that writes at IndyHSHoops.com, Inside The Hall andUMHoops.com. You can also follow him on twitter @IndyHSHoops