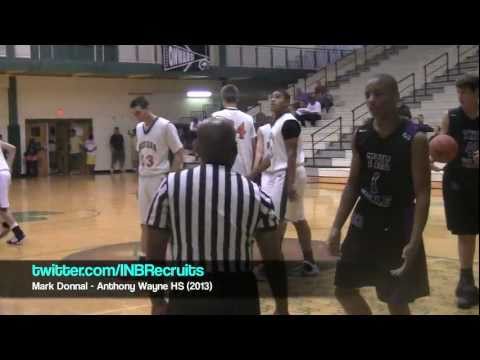 Michigan commitment Mark Donnal missed the first two days of the live evaluation period, but was back on the floor in Indianapolis on Friday. The 2013 big man continues to impress develop his inside-outside game and UMHoops was on hand to see him in action on Friday:

Donnal also had time to discuss his decision to commit to Michigan and his goals for the summer in the following video interview. We have that interview, transcribed quotes and additional spring highlights after the jump.


Can you tell me what it’s been like to be back on the floor with your team this July? It’s great to be back and start playing with these guys and get ready to win a few tournaments this July.

How do you feel like you’ve progressed from April and May up until now? We’ve definitely gotten a lot better as a team, getting a feel for everybody and startp laying a lot better.

How would you describe yourself as a player? I play both inside and out. Take it inside I’ve got post moves and can also hit midrange jumpers.

What are you trying to work on this summer? My mid-range jumper, extending it out to three. Stuff like that.

With you being committed to Michigan already, does that take a little pressure off of you? It takes a little off but there’s also a lot on me because I have to live up to expectations and get a lot better so that once I get to Michigan I can be successful.

What have the coaches up there told you they like about your game? They’ve told me they like how I can shoot the ball and also play down low.

What made you pick Michigan over other schools? I was just happy with coach Beilein’s vision for me as a player.

Here are some additional highlights of Donnal from the AAU season thus far, courtesy of The Indiana Basketball Recruits: