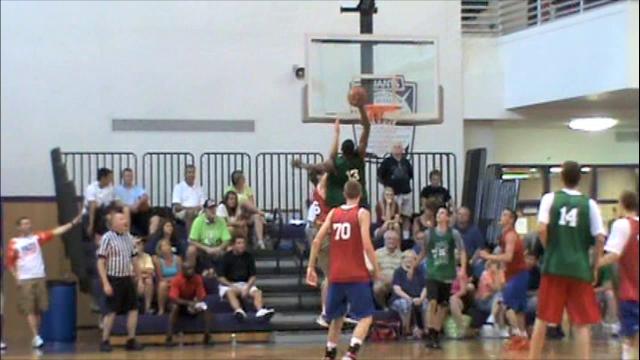 Players from all over the State of Indiana converged at Ben Davis High School on Monday for the Annual IBCA Top 100 Showcase. The event, which is open to NCAA coaches, features the top underclassmen in Indiana. Participants engage in a variety of drills, skill evaluations, seminars and three rounds of scrimmages prior to the day’s end. This year’s event was highlighted by names such as Gary Harris, Zak Irvin, Basil Smotherman and many others. Among those in attendance was class of 2012 Michigan commitment Glenn Robinson III. Michigan head coach John Beilein and assistant Jeff Meyer were in attendance at the event, keeping close tabs on Robinson and many others. Check out UM Hoops’ scouting notes on Robinson as well as video from his scrimmage play.


Scouting Report:
Robinson was among the top performers at Monday’s IBCA Top 100 Showcase. The 6-foot-6 Michigan pledge made an impact across the board with his solid all around play. Robinson scored with great versatility: knocking down jump shots, scoring out of the low post post, finishing contested drives off the bounce. He welcomed contact to earn free throw opportunities and finished well. The class of 2012 star continued to build on his strong summer as he showed off an impressive, versatile offensive game throughout the day. He also added a handful of impressive dunks, several of which are featured in the video above.

For more scouting from the IBCA Top 100 Showcase, make sure to read my full report at IndyHSHoops.com.