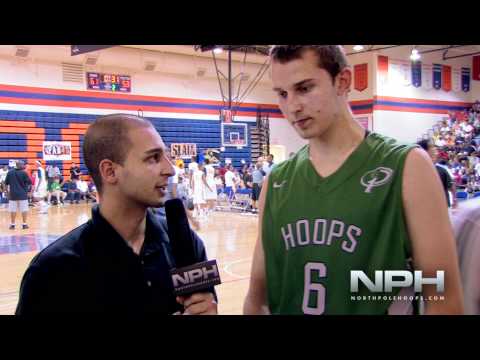 The live evaluation period is back in full swing with major tournaments in Orlando, Las Vegas, St. Louis and more. Michigan commitments and recruiting targets continued their strong play this July in front of college coaches from across the country.

Nick Stauskas was impressive in the first half of the live evaluation period and might have been even more impressive through early play in Vegas. Stauskas is averaging 23 points per game through his first five games while knocking down over half of his threes. His Grassroots Canada squad will resume play in the quarterfinals this afternoon. Here are some scouting reports from national and regional scouts in attendance:

Nik Stauskas, Grassroots Canada: The Michigan commitment had one of the more impressive scoring efforts of the day against the Danny Granger Hurricanes, filling up the shot chart with makes from all over the floor. The 6-6, 195-pound senior has a deceptive burst with the ball in his hands and is a tough matchup on the perimeter with his size and strength.

Grassroots Canada put forth a solid display in their win over the Danny Granger Hurricanes, with Michigan commit Nick Stauskas and 2012 forward Jalen Pennie being two of the players who stood out. Stauskas showed off his perimeter shooting skills, and he’s working on improving his quickness and explosive ability as he’s coming off of an injury to his right knee.

2013 commitment Mark Donnal has also put together a strong week, helping Indiana Elite South to the semi-finals of the Super Showcase in Orlando. The big man continues to develop and improve each time out. Indiana Elite South was eliminated in the final four by No. 7 ranked Garner Road, 65-64, after a missed buzzer beater. Donnal also caught the eye of North Star Basketball with his strong play.

Austin Hatch’s family posted an update to his Caring Bridge page over the weekend:

We are excited to now participate with Austin during the rehabilitative phase of healing.  We are optimistic that Austin’s self-motivated, disciplined and high-energy approach to life will surface as he faces the challenges before him.  We are drawing strength from Austin’s courage and our loving God who is taking us from despair to new hope and progress each new day.

Stay tuned to UMHoops in the coming hours and days for more updates from the recruiting circuit.