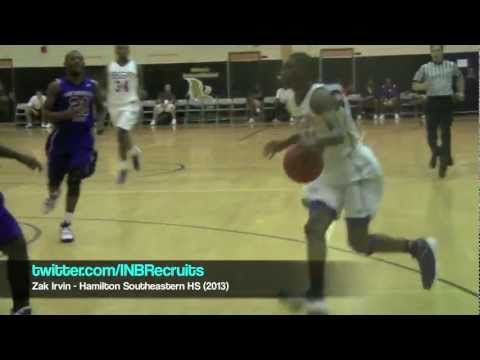 John Beilein discovered Zak Irvin over a year ago while watching his high school teammate, Gary Harris, in practice. Ever since, the 6-foot-6 wing forward has been one of the top 2013 prospects on Michigan’s recruiting board. Irvin picked up plenty of early offers but stayed true to the process, waiting patiently and opting not to commit early like so many other highly touted Indiana natives. In June he picked up coveted offers from Michigan and Butler, his eventual final two schools, before putting together his best month of basketball on the July evaluation circuit.

After officially trimming his list to just two schools last week, Irvin made the call today and informed John Beilein that he wanted to join the Wolverines – as was confirmed by his AAU coach. He is the third 2013 commitment for John Beilein, joining Austin Hatch and Mark Donnal in the class. Irvin is also the third commitment from the state of Indiana in Michigan’s 2012 and 2013 classes. Find more information, scouting reports and video after the jump.

Irvin was once ranked as a top-50 prospect by most scouting services but saw his stock fall a bit this spring to around the 75-100 range. Observers noted that he turned his potential into production this July, and he should expect to rise in most post-summer recruiting rankings. Here’s where the major national scouting services ranked Irvin before July:

The first thing that stands out when you watch Irvin play is his length. He’s a legitimate 6-foot-6 and has long and skinny arms. He uses his length effectively on both ends of the floor and is most effective offensively with the mid-range jumpshot. He’s a capable shooter out to three point range and has shown a more attacking style of play this July.

Here’s what Joe Eberhardt had to say about Irvin the last time he saw him play at the Best of the Midwest tournament in July:

Irvin was arguably the top performer of the tournament at last week’s Best of the Midwest. He shot the ball very well, knocking down perimeter and mid-range jump shots off the bounce and the catch. Irvin also was a formidable passer and distributor, getting into the lane and using great vision to find teammates for open shots. Perhaps what was most impressive about Irvin’s week was the efficiency with which he performed. He made the most of the shots he took and wasn’t forcing the action as a penetrator or a passer.

Kyle Neddenriep of the Indy Star noted Irvin as one of 10 Indiana players that boosted their stock in July:

The 6-foot-6 wing from Hamilton Southeastern put together several strong performances in a row, particularly at the Best of the Midwest at the end of the week. Irvin even played point guard at times, which had to intrigue the coaches watching him (Butler’s Brad Stevens and Michigan’s John Beilein were at about every game). Irvin has been known as a shooter, but he’s also a very good defender and is starting to play with a lot more confidence. It looks like the 2013 prospect is having fun on the court.

ESPN’s Joel Francisco raved about Irvin after watching him in the championship game at the adidas Super 64 in Las Vegas:

Irvin is a prototypical 3-man for the high-major level. He has a terrific frame and he’s very athletic, but it’s his ball skills that really caught our eye. He has a knack to score in a variety of ways from the 3-point line as well as off the dribble. He had a couple of notable drives to the basket and he converted a few legitimate pull-up jump shots with a defender right on him. Irvin is a top-30 prospect for his class with continued improvement.

Here’s my take from Michigan’s Elite Camp in June:

He’s probably 6-foot-6 with a long wing span and is a very smooth athlete. His favorite move offensively is the pull up mid-range jump shot off of one or two dribbles, a shot that he can get almost whenever he wants. He needs to continue to improve his handle. At one point Javontae Hawkins caught him being careless with the ball and picked his pocket for an easy bucket in the other direction. As his handle develops, he should become more comfortable attacking the rim, rather than settling for the mid-range jumper.

Irvin has the tendency to defer a bit too much on his AAU team but was the closer for his squad in 5v5 play on Saturday. While he was on the floor, the offense ran through him and he played with great confidence. He hit the game winning shot, a coast to coast driving layup at the buzzer, in the first game of the night and calmly sunk the game winning sudden death free throw in another.

Irvin adds to the dynamic collection of wing players that John Beilein has stockpiled in recent classes. The most impressive aspect of Beilein’s recruiting haul is that each wing player has a unique skill set. Stauskas is a three point shooter with handle, Robinson a terrific athlete, Hatch a bigger and stronger shooter and now Irvin is a long and athletic mid-range player. With that many wing options in back to back classes there are a variety of looks – big and small – that Michigan will be able to utilize between the two, three and four positions.

The addition of Irvin to the 2013 class means that Michigan will most likely focus all of its attention to the point guard offerees: Monte Morris, Derrick Walton and Demetrius Jackson. That coupled with more attention to the class of 2012 where options like Mitch McGary, Stefan Jankovic, Sherron Dorsey-Walker and Gary Harris remain possibilities of various likelihood. In a hypothetical world, Irvin’s decision wouldn’t have any effect on someone like McGary who is likely a 1-and-done player. This sort of scholarship math will work itself out – when factoring in NBA departures, injuries, 5th years and transfers – especially when the class of 2013 is still two years away from setting foot on campus.