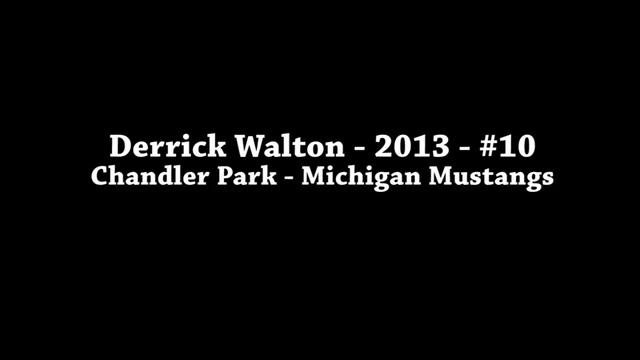 2013 point guard Derrick Walton has committed to Michigan. Walton is the second 2013 commitment that the Wolverines have landed in as many days. Walton is a consensus top 100 recruit and is ranked 88th by Rivals.com, 77th by Scout.com and 92nd by ESPN.com. Those rankings were published before the July evaluation period where Walton excelled, exploding for over 30-points on several occasions in front of Michigan head coach John Beilein.

Walton joins Austin Hatch, Mark Donnal and Zak Irvin as Wolverines in the class of 2013. Video, scouting and more information after the jump.

Walton is a pure point guard that makes his teammates better. He thrives in transition where he does a great job of finding shooters on the wings as well as passing off of the drive. He’s a capable scorer that can get into the paint at will but his size really limits his ability to finish around the rim. He’s probably right around 5-foot-11 although he is a hair stronger than someone like Monte Morris.

We had the chance to watch Walton at the King James Classic this spring:

Walton played a tremendous floor game. He is extremely quick but does a great job of playing under control. He’s a pass-first guard that thrived pushing the ball in transition but also found his teammates in the half court offense. The Mustangs have some great shooters and Walton did a great job of driving the lane and kicking the ball to the wing. Walton also showed tremendous toughness. He’s been battling a knee injury all spring and took several hard shots and falls during the game. He had a noticeable limp but managed to tough it out and lead the Mustangs to a close win over a talented NY Gauchos squad to win their pool.

His biggest weakness is his size and it hindered him from finishing around the basket several times. He showed a great mid-range jump shot but was unable to find his range from beyond the arc. Three point shooting is extremely important for small guards, and it’s an area he’ll have to continue to work on.

Walton is most comfortable with the ball in his hands, pushing the tempo in transition. He’s the type of player that almost seems to move faster once he gets the ball into his hands. His pace seemed to be kicked up an extra gear during the full court scrimmages because he knew he had only four minutes of clock to work with.

Walton shot the ball very well in drills, especially from mid-range, and does a great job getting everyone involved during game action. While he shot the ball well off of the catch, he still needs to work on his consistency while shooting off the dribble.

Like any good point guard, Walton makes his teammates better by getting them the ball in positions where they can succeed. He has a good feel for the game with great court vision which, combined with his quickness and ability to get into the paint, make him a very tough guard.

Our own Joe Eberhardt had this to say when watching Walton at the Adidas Invitational this July:

After struggling in a Wednesday pool game vs. Martin’s Wolverines, Walton was outstanding in a loss to Spiece Indy Heat 16u on Thursday, scoring 35 points and showing off a well-rounded game in the process. Not only did the 5-11 Walton shoot the ball well, but he also did a great job of attacking the basket off the bounce to score as well as draw contact. The 2013 Michigan target displayed a reliable free throw stroke and was able to take advantage of easy scoring opportunities at the line. When attacking off the dribble, Walton also did a nice job of seeing openings and finding teammates for baskets.

Fit
Trey Burke is the Michigan point guard of the present and Derrick Walton is the point guard of the future. John Beilein likes to take a point guard in every other class and Walton continues that trend. He’s a pure point guard that uses his quickness to get in the lane and create for others. He’s also a more than capable scorer as he proved on the AAU circuit this July.

Walton rounds out a terrific class of 2013 for Michigan that features three top-100 players in Walton, Irvin and Donnal. Michigan is more than likely done with class of 2013 recruiting with a guard, two wings and a big man already committed. However there are obviously still questions about Austin Hatch’s health and future that will be answered in due time. We’ve updated the scholarship chart and it’s important to remember that these kids won’t even sign a letter of intent for over a year and that attrition is possibly with transfers, early entry, injuries and other circumstances.

Walton is also a signature recruit for John Beilein and his staff in the state of Michigan. The timing of Walton’s commitment is no coincidence as he was scheduled to visit East Lansing tomorrow afternoon and was extremely likely to add a Michigan State offer – in a similar fashion to Denzel Valentine and Matt Costello last summer. Of the three point guard targets that Michigan had offered, Walton had arguably the most productive July and appeared to elevate his game.