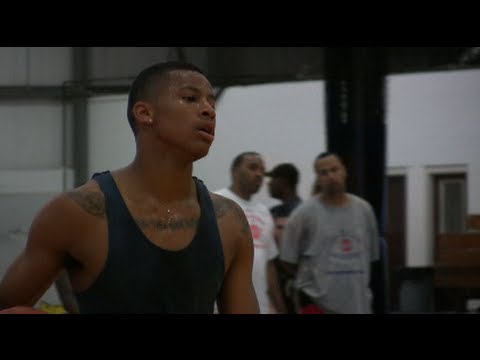 Borrowing an idea from our friends at Inside the Hall, here’s an early look at five major storylines affecting the Michigan backcourt for this upcoming season.

How does Trey Burke perform as a true freshman point guard – In all but the rarest circumstances, freshmen point guards struggle. We examined this phenomenon during Darius Morris’s freshmen year and despite his struggles as a freshman, he excelled as a sophomore. Reports from open gym on Trey Burke have been extremely positive, with some going as far as proclaiming Burke as the best player on the floor for stretches. Open gym is just open gym, and the hardest step for Burke will be learning the offense once practice starts. That being said, his quickness and three point shooting should add a new element to the pick and roll offense that was featured last season with Darius Morris.

Ty Kish, from City League Hoops, posted some footage of Burke at a recent summer league game in Columbus. The footage isn’t necessarily earth shattering but it’s pretty clear that Burke has gotten bigger and stronger:

Carlton Brundidge’s impact – I have always been a fan of Carlton Brundidge’s game, and love that he adds an entirely different element to Michigan’s roster: a strong, powerful attacking guard that lives in the paint. There are legitimate questions as to where he fits into the Michigan attack as a freshman. Is his game college ready enough – limiting turnovers, shooting from the perimeter, defending quicker players, etc. – to contribute immediately? If he’s going to play then he has to beat out Douglass, Burke, Novak and Vogrich for playing time at the guard spots. John Beilein has discussed Brundidge as a potential option at the point guard but I’m not sure if this is his best fit. In an ideal world Brundidge will find some sort of microwave style role off the bench, providing an offensive spark with some instant change of pace offense.

Finding the perfect role for Stu Douglass – Douglass has proven that he’s capable of playing point guard in a pinch. He’s also displayed the ability to do a respectable job defending opponents’ best guards. Unfortunately his shooting has seemed to suffer during his career as he plays more minutes and devotes more focus to other elements of his game.  The most natural role for Douglass at this point sees to be the first guard off the bench. That allows him to spell Burke if he struggles, or shift Novak to the four position and utilize a smaller lineup. Douglass shot the ball very well early in Michigan’s season while he was coming off of the bench but his stroke seemed to wear down as the season progressed, can Douglass maintain shooting consistency throughout the whole season as a senior?

Does Zack Novak play in the frontcourt or backcourt? – This has been the primary question throughout Novak’s career and has a massive effect on both the Michigan frontcourts and backcourts. Last season Novak started 23 games at the four position and 12 games at the two. Even in games that he started at the two, it’s probably fair to say that he played a majority of his minutes at the four position. With Evan Smotrycz’s development and the addition of Max Bielfeldt, there’s a chance that Novak could see fewer minutes in the front court this season. Novak isn’t a perfect fit for either position but there’s no doubt that he’s going to play a lot of minutes somewhere.

Finding minutes at the back-up three position – With a bit of a log jam at the two spot – Douglass, Novak, Brundidge and Vogrich are all options – there are some interesting scenarios that could develop in Tim Hardaway Jr.’s back up slot. Obviously there aren’t a lot of minutes here, as Hardaway should play well over 30 per game, but this should allow Michigan to expand into some different offensive looks. Vogrich backed up Hardaway last year and really started to develop as a shooter with the ability to play a bit of two or three. Brundidge isn’t built like a three but could thrive offensively through some of the pick and roll sets that Hardaway utilizes at the position. Novak has never really played the position, usually shifting between the two and the four but could provide yet another option.