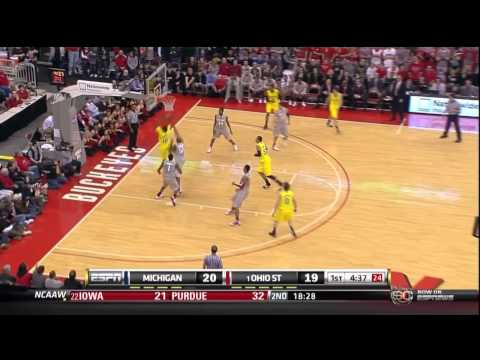 In what we hope to make an annual feature on the blog, here’s an early look at some of the Big Ten players that could have breakout performances during the upcoming season. These are generally players that had limited roles in the offense due to opportunity, or had slightly underwhelming seasons, last year but should be in line for a much more productive season in 2011. Last year we outlined high offensive rating and low usage, high usage blocking players departing and in-season improvement as some of the major criteria for identifying breakout players. As a rule of thumb, players that were named to the All-Freshman Team last year (Jared Sullinger, Aaron Craft, Melsahn Basabe and Tim Hardaway Jr.) are ineligible for this squad.

Deshaun Thomas (Forward, 6-6, 230lbs, Ohio State)
Deshaun Thomas had no problem finding field goal attempts when he was on the floor last season. He used a higher proportion of shot attempts while he was on the floor than any other player, including conference player of the year Jared Sullinger. For such an aggressive player, Thomas posted pretty solid shooting numbers, making 54% of his twos and 33% of his threes. His defense on the other hand, was an issue as plays like this were a bit too common. Thomas has the talent and his defense should come along as a sophomore and the opportunity is there with both Jon Diebler and David Lighty graduating on the wings.

Keith Appling (Guard, 6-1, 180 lbs, Michigan State)
Tom Izzo has proven plenty successful with score-first lead guards. Most recently Kalin Lucas and Drew Neitzel have spent significant time as the focal point of Izzo’s offenses. Appling used just 15.2% of the Spartans’ available possessions last season but is all but guaranteed to play a significantly bigger role in next year’s offense with the departures of Kalin Lucas and Durrell Summers. He was the best three point shooter on last year’s Michigan State squad, making 41% of his 95 attempts, and is a great defender as well, a trait that goes a long way in East Lansing.

Tim Frazier (Guard, 6-1, 160lbs, Penn State)
I’m biased because my last memory of Frazier was from press row in Indianapolis when he shredded Michigan State for 22 points on 13 shots along with eight rebounds and six assists. It did appear that the diminutive guard turned a corner in the final month of his sophomore season. He grabbed five or more rebounds in six of his final nine games and averaged 10 points through his final eleven games. He’s not going to be Talor Battle and, more importantly, he won’t have Battle around him to distract opposing defense. That being said, Penn State returns very little and Frazier was impressive during what was one of the best months in recent history for Penn State basketball.

Oladipo’s freshman season saw its fair share of ups and downs but he has the sort of energy and athleticism to make Indiana fans excited for the future. Oladipo has spent the summer getting stronger, up to 214 pounds, and is likely to see his playing time increase. Oladipo isn’t much a perimeter scorer but he converted on an impressive 59% of his two point attempts while getting to the line as often as any Hoosier. That aggressive mentality translated to the glass where Oladipo was Indiana’s most effective offensive rebounder. It’d be nice to see him become a little more careful with the basketball but his role should increase as he’s one of main players on the Hoosier roster that demonstrates the aggressive mindset that Tom Crean is looking for.

Evan Smotrycz (Combo forward, 6-9, 230lbs, Michigan)
Smotrycz makes the cut, mostly because I’m scared to omit the most likely Michigan player to break out. Last year I skipped Darius Morris and he turned out to be perhaps the most improved player in the entire country. We discussed Smotrycz in depth earlier this May but he has put in work on his body and should be more prepared to deal with the physical nature of the Big Ten. He’s a good perimeter shooter but his ceiling depends on his ability to develop a mid-range jumpshot or learn to take the ball all the way to the rack. If he’s able to develop that two point game, 43% last year, he could become a great 2nd or 3rd scoring option for the Wolverines.