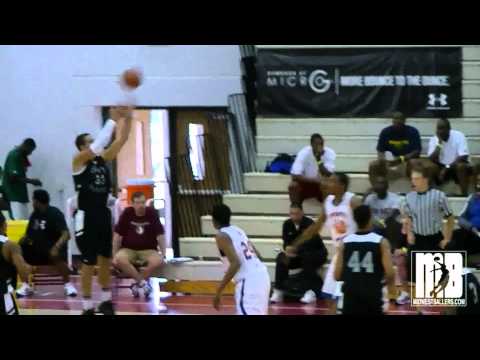 Any recruiting notes from the weekend have to start with Mitch McGary. The number three player in the class of 2012 was on campus for a two day official visit which reportedly went as well as one could ask for. You can see McGary during his visit in the picture above, to the right in a blue t-shirt, cheering as Brandon Herron returns a touchdown. A poster on MGoBlog even talked with him at the game as McGary was hanging out in the student section during the rain storm, even grabbing a picture.

The problem for Michigan is that McGary still has a handful of other high profile visits on deck. The postgraduate actually has the option to take more than five official visits but right now his next scheduled official visits are to North Carolina and Duke later this week. He’ll head back to school at Brewster next Wednesday and could still take officials to Kentucky, Maryland and Florida.

McGary doesn’t do a lot of talking about his recruitment, especially in the midst of taking visits, but Wayne Brumm, his SYF Players AAU coach, continues to promote Michigan to anyone that will listen. Michigan is in the fight and the Wolverines have clearly put their best foot forward but this is also a battle that won’t be won easily and probably won’t end anytime soon.

Here’s a fresh highlight film of McGary, posted by Midwest Ballers, from the NY2LA Tournament in Milwaukee during July:

A number of younger prospects made it out to the game as well. 2013 commitment Derrick Walton was in attendance as well as 2014 prospects such as Drake Harris, Tyler Wideman and Keita Bates-Diop. As the Michigan staff continues to turn their focus to class of 2014, we’ve finally published a handful of 2014 recruiting profiles. You can find the 2014 Watch List here with links to recruiting profiles featuring information, videos and links to tagged content throughout the blog. This is just a preliminary list and it will be constantly updated over time.

Luke Kennard was one notable 2015 prospect in attendance as well. Kennard, a 6-foot-3 guard from southwest Ohio, is already on the ESPN 2015 Top 100 watch list and drew plenty of attention from John Beilein and his staff this summer. Here’s some footage of Kennard from AAU nationals in Orlando this July:

And some additional footage courtesy of Ty Kish and City League Hoops:

The Latest on Austin Hatch

Another great week by a determined and hard working student athlete. Austin has a beautiful attitude and is enjoying day visits with close friends and family. We are following the medical staff advice to control the visitor schedule to no more than three at a time to allow him to focus on his recovery. While the length of the rehab program is still unclear, he looks forward to returning to home and normal activities.