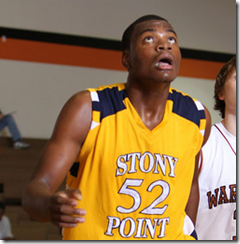 Zack Novak and Stu Douglass have been making the media rounds lately as college basketball preseason content slowly comes to the forefront. The duo participated in a Q&A session with Chantel Jennings, of ESPN’s newly formed WolverineNation. Perhaps the most interesting quote was from Douglass on the team’s off-season workouts without Crisler Arena available:

Douglass: It was tough. It was one of the more stressful summers I’ve had here. I had to take eight credits. I’ve never taken that many credits in the summer. And not having guaranteed gym time. The freshmen have a lot of stuff to do with their programs, and orientation, so it was tough to see all the guys and bond as a team like we’d wanted to. Tim [Hardaway Jr.] was gone, Jon [Horford] was gone. But I think we did as well as we could with what we had. I’m worried about coming into the year with all the problems we had in the summer, all the hurdles we had to jump over. But once the season comes we’ll be as close as ever like a team.

Some might overlook comments about off-season cohesion, or lack thereof, but this was undeniably a major issue during the 2009-10 season. Last year was a dramatic opposite as the entire team got practice, game and travel time during August. This team has stronger core leadership (something Novak and Douglass discuss further) but this is a storyline worth following.

More notes on the upcoming season, Mitch McGary, an emerging 2013 target and more after the jump.

Novak was also profiled by Jeff Eisenberg at the The Dagger in a piece that features some nice quotes from Novak as well as head coach John Beilein. Novak discusses his emotional moment on the sidelines in East Lansing:

“Normally I try to stay even-keeled, but it was such an important game and things weren’t going the way we wanted it to, so I just lost it,” Novak said. “I wanted to make sure guys knew it was the biggest game of the year. We were struggling, but I knew if we won that game, it would turn everything around.”

On the other hand, Beilein discusses Novak’s bolder approach to earning a scholarship:

“He flat-out asked me after a game, ‘Coach you’ve seen me three times. Do I have a scholarship or not?'” Beilein recalled with a chuckle. “I just liked that in him. I was in my first year at Michigan and I was still trying to figure out what we needed, but I told him, ‘Let’s bring you here for a visit and if you like it, it’s yours.”

The full article is definitely worth a read.

Back on the Road

College basketball coaches are back on the road recruiting and will be traveling across the country for in-home visits and watching open gyms.

Beilein and Bacari Alexander made their way out east to stop in on 2012 commitment Nick Stauskas, who is slated to make an official visit on September 24th.

From there the duo traveled to Vermont Academy to watch 2013 big man Dominic Woodson. Woodson, a transplant from Texas, has seen his stock skyrocket in recent months. New England recruiting expert Adam Finkelstein describes Woodson as “apoor man’s Dejuan Blair, a power player and space eater inside the lane who bullies his opponents on both ends of the floor.” Most importantly, Woodson lists an offer from Michigan as well as Oklahoma, Michigan State and Baylor with interest from Louisville, Florida, UConn and Texas. An offer would likely have to be made official by a visit to campus but the Michigan interest appears sincere with Beilein and Bacari attending open gym.

Jeff Goodman reports that John Beilein will make his way to Brewster on Wednesday for an in-home visit with Mitch McGary. Goodman lists McGary’s official visit schedule as follows: Roy Williams and Beilein on Wednesday, Mike Krzyzewski on Thursday and John Calipari on Saturday.

The IndyStar’s Kyle Neddenriep released his first draft of 2014 rankings for the state of Indiana yesterday afternoon and his rankings are listed in parentheses below for prospects that Michigan assistant coach Jeff Meyer watched this week. Neddenriep adds some nice background and scouting information on each of the top-20 prospects.

Meyer stopped in on Wapahani guard Grant Evans (No. 11), who is planning an unofficial visit to Ann Arbor this weekend, early today. He also stopped by to watch Perry Poindexter (No. 6), Trevon Bluiett (No. 3), Aaron Brennan (No. 19), Greensburg teammates Sean Sellers (No. 7) and Bryant McIntosh (No. 15) and Brownsburg teammates KJ Walton (2015) and Jaraan Lands (No. 13).

There’s little doubt that Michigan will continue to work to make it’s recruiting presence felt in the state of Indiana.

The Dagger picks Michigan third in the league and hits home on the standard points: Darius Morris’s departure and whether Trey Burke can carry the Wolverines. Here’s a snippet from the full article:

Michigan likely would have contended with Ohio State and Wisconsin had Morris returned, but instead the Wolverines will go as far as whoever replaces him at point guard takes them. The most likely heir apparent to Morris is freshman Trey Burke, a Columbus, Ohio, native with a smooth jump shot and the ability to penetrate the lane and find teammates off the dribble.

Eamonn Brennan echoes similar sentiments at College Basketball Nation and hits on a similar point but notes that it will be Tim Hardaway Jr. who will have to shoulder the largest offensive burden:

Michigan guard Tim Hardaway Jr. benefited greatly from the assist-happy tendencies of former backcourt mate Darius Morris in 2011. Now, Morris is a locked-out NBA player, the Wolverines are determined to make the leap, and Michigan will hope to get even more from their promising young star.

The early nomination for most ridiculous preseason rankings goes to Lindy’s Magazine, who picked Ohio State first. That’s a questionable but defendable move but picking Vanderbilt fourth and Michigan seventh in the country does more than raise a few eyebrows.