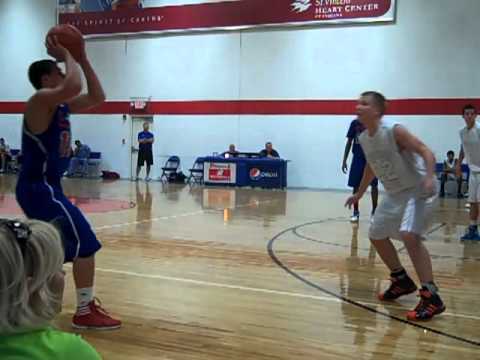 Perry Poindexter is a 6-foot-7, 190-pound power forward from North Central High School in Indianapolis. He played junior varsity as a freshman last season, but his 7-foot-2 wingspan and his potential have caught the eye of many Big Ten schools. Poindexter is rated the No. 4 player in Indiana’s class of 2014 by Inside the Hall. Here’s what Poindexter had to say about his game and the recruiting process so far:

For those who haven’t seen you play, can you describe your game? Offensively, just finishing around the basket. Defensively, controlling the middle and that’s really it.

What’s your biggest strength? Probably finishing on the inside and my post defense, guarding people that are bigger than me.

Poindexter is a long forward who excels at blocking and challenging shots in the paint as well as rebounding the ball in traffic. He is still developing his offensive game but the 6-7 sophomore has shooting range out to about 16-feet and is a threat to score on the offensive glass. Poindexter has great upside as long as he continues to develop and gain strength.” –Joe Eberhardt

Have any of those schools stood out to you? Yeah, Xavier, Michigan, Purdue and Indiana.

You were set to visit Michigan this past weekend. Did that happen? I have to set up another day. I was supposed to go this weekend, but I don’t know why it didn’t happen. It just didn’t work out.

Have you visited other schools yet? Yeah, I have visited Purdue, Indiana and Xavier. I liked them all.

Have you talked to any Michigan coaches yet? Not a lot, I just spoke with them at the Michigan camp (College Practice Camp in June).

When you get closer to making a decision, what are the main things you’re going to be looking for in a school? Location, how big the school is on sports and what the people are like that they’re recruiting in my class.

Do you know anything about Michigan and what do you think about it? So far I like the recruiting mix. Zak Irvin just recently committed. Academically I don’t really know that much about Michigan.

Is there any player that people tend to compare you to? Yeah, JaJuan Johnson from Purdue. I get compared to him a lot.

Any idea when you’d like to make a decision? If I get the right offer from the right school and it’s the right thing for me, I’ll commit.