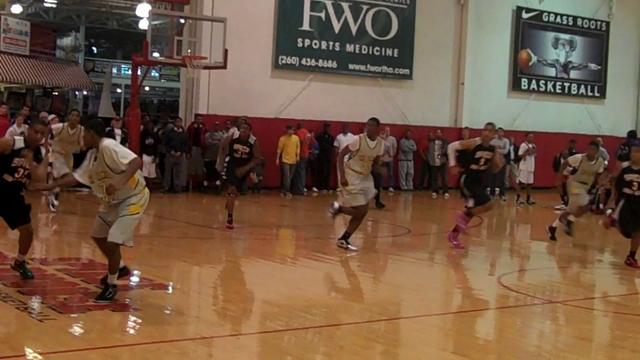 Trevon Bluiett is a 6-foot-5, 185-pound small forward from Park Tudor High School in Indianapolis. His coach is former New Jersey Nets assistant and former University of Memphis assistant Ed Schilling. In the 2A State Championship game last year, Bluiett, then a freshman, had 21 points and 8 rebounds and made the game-winning bucket. He’s already received offers from several schools, including Indiana and Purdue. I caught up with the sophomore earlier this week. (Find more video at Inside the Hall)

How would you describe your game? I’d say I’m a shooter. I can get to the hole whenever needed, and I can go out and guard somebody if somebody needs me to. Kind of like an all-around game.

What schools are recruiting you? I have Indiana, Purdue, Xavier, IUPUI and Virginia as my offers. Florida State, Marquette, Michigan, Dayton and Illinois are the other schools that are contacting me the most right now.

Bluiett is an opportunistic wing player who makes contributions across the board offensively. The 6-5 sophomore is a solid shooter from deep, an aggressive offensive rebounder and is crafty off the bounce as a scorer. The two biggest areas he needs improvemenet are his defense and physique. –Joe Eberhardt

Is there any school that has stuck out to you above the rest? When I went to go visit Illinois, I liked Illinois. It was a good place.

You won the state championship last year, can you talk about that a little bit? It was a good experience. My first year playing in a state championship, not too many freshmen get to do that or make the last second shot either. So it was a great experience for me and I’m hoping to do it again this year.

So you made the game-winning shot? Yeah. Well, our center, he had shot a three. This was a minute and a half left in the game, and he shot a three, and I got the rebound and put it back in, and then we went up by one and nobody else scored. I had 21 points and 8 rebounds that game.

Have you talked to any of the Michigan coaches at all? I talked to Coach Beilein, and on Wednesday Coach Jordan came to our open gym.

And what’d you think of them? I didn’t talk to Coach Jordan but he seems like a cool guy. I know Coach Beilein is a really good guy, and on the phone he sounded like he was a good guy to be coached by.

Know anything about Michigan basketball or their offense? Not really. I watched them a lot last year in the tournament. I don’t know anything else about the offense or anything.

Any player people tend to compare you to? Carmelo Anthony.

Once you get closer to making a decision, what are you going to look for most in a school? I would say a good coaching staff. Feel comfortable with the coaching staff and the team, and just style of play. And most importantly the academics.