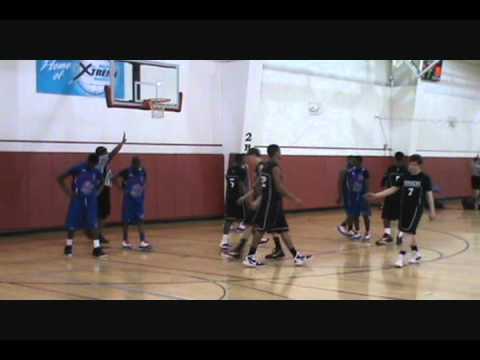 The 6-foot-9, 265 pound, big man is one of the fastest rising 2013 post players in the country and caught the Michigan staff’s attention this July while playing with the Ray Jackson Shooting Stars. The Wolverines aren’t the only high major program taking notice, Woodson has also earned offers from Michigan State, Maryland, Oklahoma, Baylor, Illinois and TCU along with heavy interest from Louisville, West Virginia, Texas, Michigan, Connecticut and Florida.

More on Woodson’s recruitment and other recent Wolverine recruiting trips after the jump.

Woodson’s prep coach, Jesse Bopp, emphasized that Woodson has the potential to be one of the best big men in the class of 2013 and has adjusted very well to life in the classroom and on the court at Vermont Academy. He reported that Woodson previously visited Baylor, TCU, Oklahoma and Texas unofficially but has yet to plan any fall visits. Bopp added that “any school that travels out here to see him and shows that he is a priority for them in 2013 is a school that he would potentially visit”. Michigan has clearly prioritized Woodson on its class of 2013 list with three coaches traveling to watch him workout in the last two weeks.

Assistant coach Lavall Jordan was on the road this week as well, traveling to Illinois to check in on a number of 2014 Michigan targets. Jordan stopped by to watch Peyton Allen and Cahokia teammates Darius Austin and CJ Rivers earlier this week.

Allen, a 6-foot-4 guard, recently visited Michigan for the San Diego State football game and tweeted afterward that it was one of the best places he’s been so far. Allen is drawing high-major interest from Purdue, Wisconsin, Iowa, Illinois, Ohio State and others with an upcoming visit to Oklahoma State scheduled.

DePaul and Illinois were also in to watch Austin and Rivers, two prospects who attended Michigan’s College Practice camp in July, on Monday. Austin is drawing high major interest from Illinois, Missouri, Purdue, Ohio State among others and has visits planned to Illinois and DePaul in mid-October.

NBADraft.net also attended the Under Armour Grind Session over the weekend and echoed previous positive reports on Robinson’s play in Chicago:

The “Little Big Dog” is an impressive looking prospect. He is active and athletic, posting the highest vertical jump of all campers. He finishes well at the rim and knocks down mid range jumpers on a consistent basis. He has also added 3-point range on his shot but is deadly from mid range. He runs the floor and finishes very well on the break. His upside is significant and has the potential to be a pro if he rounds out his ball handling ability. He is committed to Michigan and should fit in well in John Beilein’s system.