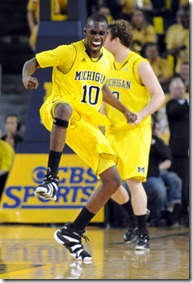 The bar has been set high for Tim Hardaway Jr. after the sophomore wing guard carried Michigan to the NCAA Tournament over the final month of the 2010-12 season. After an up and down start to his freshman campaign, Hardaway averaged just shy of 18 points per game with a remarkable 70 percent effective field goal percentage during the final 12 games of last season.

Hardaway transformed from supporting player to star, serving as the catalyst that accelerated Michigan’s growth and carried the Wolverines into the NCAA Tournament. He spent the summer abroad as the third leading scorer for the Team USA U-19 Team at the FIBA World Championships and was named to the preseason watch list for the John Wooden award. Expectations are high because they should be high. For that final 12 game stretch Hardaway was among the best players in the Big Ten and if he can match that sort of production throughout the upcoming season he will carry Michigan on his back.

Reasons to be Excited:

Tim Hardaway Jr.’s performance down the stretch last year was one of the most impressive in recent Michigan basketball history. He improved nearly every game – a coach’s dream – and not just as a shooter. He consistently got his teammates more involved and played within the offense. With Darius Morris gone, Hardaway Jr.’s ability to see the floor and find an open teammate will be critically important and challenged to a higher degree. Team USA struggled a bit overseas with a disappointing finish in the FIBA World Championships but the experience should only help Hardaway continue to grow as a player, as it has done for several other recent college stars.

Hardaway, more than any other Michigan player, will have to fight the weight of expectations. He finished the season with a 16-game stretch that consisted of very few, if any, bad games. Good play turned into better play and Hardaway rarely faced personal adversity during the final month of the season. It’s unlikely that he can keep up that torrid shooting efficiency (70% effective field goal percentage) over the course of an entire season. He will need to prove that he can play consistent basketball for 30+ games and that a three or four game shooting drought doesn’t turn into a more extended slump.

What is the ceiling for Tim Hardaway Jr.? His numbers should increase across the board as he fills the primary playmaker role. A scoring average over 15 or 16 per game sounds reasonable and an up-tick in assists is likely as well. He probably won’t be able to match his impressive 44 percent three point shooting from conference games last season but he should be able to improve on his sub-50 percent two point shooting numbers to help his overall efficiency. With Morris gone, this is Hardaway’s team on the offensive end of the floor and the Wolverines will go as far as the sophomore guard takes them.