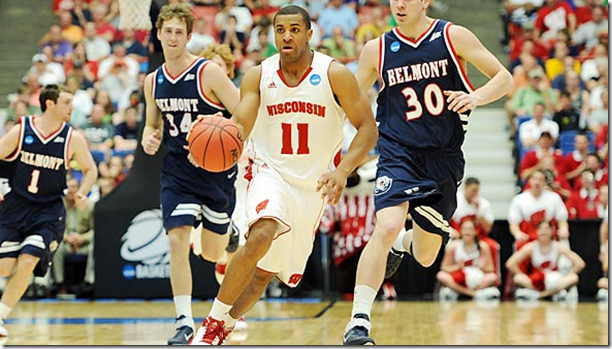 In a new 2011-12 preview feature we’ll be looking across the conference, position-by-position, at the Big Ten’s top players. We’ll breakdown the conference’s top 10 guards, wings, combo forwards and centers over the coming week. We’ll start with the guards.

Upside: Taylor was the most efficient player in the conference last season. He was deadly from three point range, didn’t turn the ball over and got to the free throw line often. Most publications have Taylor rated as a preseason All-American and he should fight Jared Sullinger for Big Ten Player of the Year honors.
Downside: While Taylor had the luxury of playing alongside one of the conference’s elite inside-out big men, Jon Leuer, last season, he’ll be forced to play with a front court defined by question marks and inexperience. How does Taylor handle the burden of carrying even more of the offense.

Upside: Craft was named to the league’s All-Freshman team last season and was one of the unsung heroes of the star-studded Ohio State team that won the conference championship. He was one of the top on-ball defenders in the Big Ten and is more than capable offensively. He connected at a reasonable rate inside and outside the arc, distributed the ball well and got to the free throw line often.
Downside: Playing point guard as a freshman is one of the most difficult assignments in college basketball and Craft performed admirably. Still, he was often the fifth option offensively for Ohio State and he had experienced wing guards and the nation’s best big man down low. He’ll still have Sullinger and Buford but will have to prove he can carry more of the load offensively while cutting down on his turnovers as a sophomore.

Upside: Cartwright returns the best assist rate in the conference and could very well improve on those numbers as his teammates become more efficient shooters. He’s the best pure setup man in the league and actually improved his assist numbers in conference play last season.
Downside: Cartwright still has the tendency to force things and turn the ball over, he also needs to become much more efficient in the scoring department. His two point and three point shooting numbers are both below average and he doesn’t get to the line as often as the league’s other guards.

Upside: After an injury riddled sophomore season, Jackson had a solid junior campaign in West Lafayette. Despite his small stature, Jackson excels scoring inside the arc and does a great job of getting to the free throw line. He’s likely to play an increased role with JaJuan Johnson and E’Twaun Moore’s graduation and should be poised for a big season.
Downside: Similar to Craft, Jackson has never played a featured role for the Boilermakers. His lack of perimeter shooting could be a bigger drawback as he takes a leading role in the Purdue backcourt.

Upside: Frazier ended the season on a high note, including a 22 point, 8 rebound and six assist Big Ten Tournament performance against Michigan State, and will look to build on that strong play as a junior. He’s one of the few returning players at Penn State and is almost assured to be the focal point of the Nittany Lion offense.
Downside: Frazier had the luxury of playing alongside Talor Battle for the first two years of his career and didn’t seem to figure everything out until the final 10 to 15 games of last season. Is he ready to be the focal point of an offense at this juncture in his career?

7. DJ Richardson – Illinois
Richardson had a big of a sophomore slump after a terrific freshman year but should bounce back as a junior with ample opportunity in the Illinois backcourt after Demetri McCamey’s graduation.

8. Brandon Wood – Michigan State
One of two fifth-year transfers on the list, Wood will look to make an immediate impact in East Lansing. He took a lot of shots at Valparaiso but made them at an efficient rate, inside and out, and should provide a reliable backcourt scoring option.

9. Sam Maniscalco – Illinois
Maniscalco missed most of last season at Bradley with an injury but the fifth-year senior is likely to start at point guard for Bruce Weber. At Bradley he scored inside and out, got to the free throw line often and did a good job of controlling turnovers.

10. Jordan Hulls – Indiana
Hulls is a shooter first and foremost but has reportedly stepped up as the leader in the Indiana locker room. An improved junior season could be the x-factor to help Indiana to put together a breakout season.