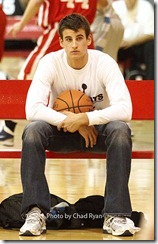 The Fort Wayne Journal Gazette confirmed that Austin Hatch has returned from the hospital and will continue his recovery process at home. The Journal Gazette notes that its unclear where Hatch will be living and published handful of quotes from the Hatch family, via e-mailed statement:

“We are extremely thankful and relieved that Austin is home with us,” Hatch’s family said Sunday in an emailed statement.

“While Austin has made great improvements, he still has obstacles to overcome as he continues to heal, grieve and acclimate to life after tragedy,” the statement said.

This is obviously a major step for Austin, but it’s also the just the first of many in a long process. Hatch was hospitalized for the last three and a half months following the crash and he still has a long recovery process ahead.