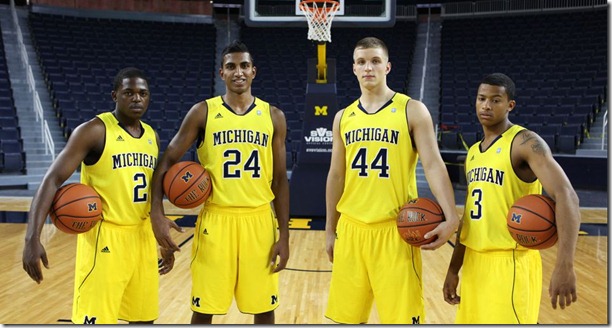 It’s officially college basketball season as Michigan hosted its annual preseason media day yesterday afternoon and will hold opening practice on Friday. Here’s a run-down of all of our media day content as well as a recap of other interesting articles around the web. First, here’s our content from Kevin Raftery.

After the jump we have a collection of notable articles, quotes, videos and image galleries from elsewhere on the internet.

MGoBlue.com has a 24-photo gallery of the festivities, AnnArbor.com has its own gallery, as well as the Detroit Free Press.

MGoBlue also has a transcript of quotes from every player and a video report from the event. Some highlights from players that we didn’t post:

On improving over the summer … “I think the first thing that I wanted to improve on was my strength. That affected every other part of my game like rebounding and confidence. I think rebounding and putting on weight was what I needed most.”

On adjusting to college basketball last year … “I think as the season went on I got more accustomed to the pace and I got used to playing against defenders and all the athletes in the league.”

On defense evolving … “Number one, being willing to take charge is a huge thing for coach, so I wanted to be able to mentally take charge. But along with that, being in the right position, being a step ahead and anticipating.”

On preparing for college basketball … “One, I had to get in shape. I kicked it with my teammates, trained really hard, and got used to lifting weights. I had never lifted weights like that before. I had to get stronger and get faster.”

On fitting into the offense … “I see myself fitting in as a true Big Ten point guard. I see myself getting layups and shooting threes here and there, but basically I need to feed my teammates and feed three-point shooters.

On the improvements to his post game he made this summer … “I just worked on being more versatile, being able to face up and being able to attack both ways. You don’t want to give your defender an advantage of guarding you knowing you only have a few moves, so just working on your overall game. One of my big focuses in the offseason in the post was being able to pass out of the post. Being a threat in the paint, there’s going to be a lot of double teams and you have to be able to see those double teams and find the open man, so I worked on that a lot this summer.”