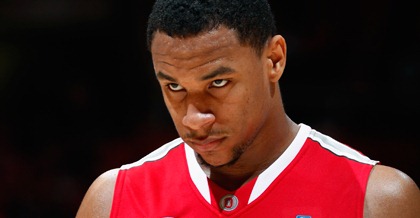 Upside: Sullinger dominated the league last season and he spent the off-season getting in shape – bad news for the Big Ten. He converts on the block, gets to the free throw line, dominates both backboards and rarely turns the ball over. The only thing that he doesn’t do well is block shots.
Downside: Sullinger loses a pair of wing guards that made over 40 percent of their threes last season, without such shooting prowess on the wings he should see even more double teams this season.

Upside: Mbakwe rebounds over a quarter of Minnesota opponents’ missed shots and blocks nearly six percent of their field goal attempts. He gets to the line regularly and connects on an impressive 58 percent of his two point attempts, most of which are emphatic dunks. After Sullinger, Mbakwe is one of the most impressive Big Ten NBA draft prospects.
Downside: Mbakwe averaged a double double last season and should do it again this year and one of the few reasons he might not are the questions in the Minnesota backcourt. Can his guards get him the ball in a position to score? Will opponents have to respect any Gophers on the perimeter?

Upside: Basabe was one of the most surprising players in the Big Ten last season and should only improve as a sophomore. In conference play last season Basabe’s production was essentially equal to Mbakwe in almost every statistical category beside defensive rebounding – as a freshman.
Downside: Basabe improved throughout the year and moderate improvement between his freshman and sophomore seasons should yield one of the most productive big men in the league. The list of areas for improvement are nitpicky: playing a few more minutes, striving for more consistency, limiting turnovers and staying out of foul trouble.

Upside: Zeller averaged 25 points and 13 rebounds per game en route to the Mr. Basketball award in Indiana last season. The McDonald’s All-American has been hailed as the savior of the Indiana basketball program and provides a fundamental big man who can score and rebound.
Downside: Despite all of the hype, he’s still just a freshman. Expectations are monumental for Zeller and he’ll have to produce early or the weight of the Hoosier fan base might begin to wear him down.

Upside: Sampson is the best returning shot blocker in the Big Ten and he should have more opportunity this season after Colton Iverson’s transfer.
Downside: Samspon’s offenseive production still leaves something to be desired. His offensive efficiency has waned over the course of his career and his rebounding numbers are sub par for a player of his size.

6. Jordan Morgan – Michigan
Morgan made an impressive 63 percent of his twos last season but needs to prove that he can score the ball efficiently without Darius Morris while staying on the floor longer and avoiding foul trouble.

7. Luka Mirkovic – Northwestern
Mirkovic is a great fit in the Northwestern offense, he converts twos at an average rate, can step out and hit the occasional three and does a solid job on both backboards. He’s not flashy, or a difference maker defensively, but he’s productive.

8. Meyers Leonard – Illinois
Leonard had a very quiet freshman season but gained valuable experience playing with Team USA in the FIBA U19 World Championships this summer. He should have ample opportunity to take the next step in his development with the graduation of the Illini frontcourt.

9. Jorge Brian Diaz – Nebraska
Nebraska’s most productive returning starter, Diaz is a solid finisher around the basket but is an underwhelming rebounder that struggles at the line. The Cornhuskers have questions in the backcourt but their offense was effective around the basket last year and Diaz should continue to improve.

10. Brandon Ubel – Nebraska
Ubel wasn’t as productive as Diaz but he was the most efficient scorer on last year’s Nebraska squad. He also posted more impressive rebounding numbers when adjusted for playing time and could be one of the biggest surprises for Nebraska next season.