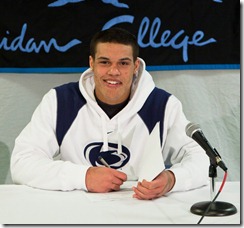 For the third consecutive we’ll be previewing the other 11 teams in the Big Ten by interviewing a collection of bloggers and beat writers with firsthand knowledge of their respective teams. We’ll begin with Penn State, who will be breaking in a new head coach after reaching the NCAA tournament for the first time in a decade last season. Eric Gibson, the basketball guru at Black Shoe Diaries, graciously agreed to answer some questions about the Nittany Lions this season.

Tell us about Pat Chambers. Most casual fans probably don’t know much about the young head coach.

I feel obligated to describe him with the one word everybody else uses – energetic. He doesn’t have much of a coaching profile, but what he lacks in experience, he makes up for in salesmanship. His college coaching career started at Villanova, when Jay Wright brought him on as the Director of Basketball Operations. Five years later, Chambers was the associate head coach during Villanova’s 2009 Final Four run. That landed him his first head coaching gig at Boston U, where he won 20+ games in back to back seasons. He’s pretty green, so I expect some learning on the job, but as a recruiter I think he’s really going to elevate Penn State’s image. It’s been hard to get a read on Chambers’ style of play, but it’s expected he will attempt to bring the Villanova 4-out 1-in model to Penn State.

Tim Frazier is probably the only returnee familiar to most fans. What do you expect out of him this season?

I think it’s pretty clear this is Tim’s team now in a leadership sense, but as far as his game is concerned, I’m not sure what to expect. He’s stepping into a much different role this season. For the last two years, he has been Battle’s facilitator but, as of now, there are no proven scorers on the roster. Frazier has shown glimpses of a scoring ability (Michigan State in the Big Ten Tournament), but he has always been the 4th or 5th option on the court. Many fans thought he was too timid at times last season, passing up open shots in favor of others. Now he’s forced to be the guy until someone else takes charge. Frazier’s game is not built to be the #1 scorer, and I don’t think he’ll ever flourish in that capacity. If Tim gets some running mates, I think he’ll continue to be a great PG and leader, but if he has to shoulder the scoring burden, I think he could be in for a long season.

Now tell me two or three other players that will play pivotal roles in the Penn State offense this season?

There’s not a lot of sure-fire options to choose from. The older guys on the team have been nothing but reserves in their careers. Cammeron Woodyard and Billy Oliver struggled mightily last season, shooting at 30.1% and 38.8% eFG% respectively. While they are the veterans on the team, they haven’t shown an ability to fill up the basket. In fact, most fans held their breath when these two got in the game to give the starters a quick breather last year. I think the two most likely to produce are Jermaine Marshall and Jon Graham. Marshall was inconsistent last season off the bench but so was his playing time. He did explode for 18 against Purdue in the middle of the season. I really like his fearless mentality and confidence to the point that I believe he’ll be the leading scorer this season. There has been a lot of hype surrounding Jon Graham during his redshirt year last season. He had knee issues at the start, so the previous staff thought it best he just sit out the year. But practice reports raved about his ability and big things are expected from him this season and beyond.

What are expectations like in State College? Is there any reason to believe this team wins more than 1 or 2 Big Ten games? Is there hope for the future?

No one expects much of anything from this season in terms of wins or postseason, but I think a lot of people are excited about the new era of Penn State hoops. Everyone seems to consider Chambers a great hire and are excited to see what he can do here. He’s already changing the recruiting scene, luring many kids on campus already that would’ve been pipe-dreams for DeChellis (they just hosted Nate Britt on an unofficial!). However, it’s hard for Chambers to make an immediate impact because there aren’t many scholarships available. As of now, he’s bringing in 3 guys (including 1 transfer) for 2012 and has 2 scholarships to use for 2013. Any hope for the near future rests on the potential of DeChellis’ holdovers. While there’s no current reason for optimism, I wouldn’t write-off these guys before we see them hit the court first.

Run down the notable incoming freshmen and what sort of players they are.

DeChellis brought in 5 new scholarship players before he departed for the Naval Academy. Word is Matt Glover (right) will likely be making the biggest impact. The junior college transfer is a 6-foot-4 versatile shooting guard with a Big Ten body that can defend. 6-foot-1 point guard Trey Lewis will also have a big impact in the backcourt. He’s got a great handle and can shoot from anywhere. A natural scorer but also a great competitor. 6-foot-7 Ross Travis is a raw, athletic small forward. He’s had a lot of injuries in high school, but if he can stay healthy, he’ll get minutes.

The two new big men seem to be projects. 6-foot-11 Pat Ackerman was brought in for his defense and rebounding, while he also can shoot from 15-18 feet. He’s scrawny at 220 pounds and wasn’t very productive in the NEPSAC. 6-foot-11 Peter Alexis put up numbers you would expect from a guy his size (260 pounds) against inferior competition. He didn’t spend much time on the AAU circuit, so he has a huge learning curve when he starts going against guys his size. I’m expecting at least one of the two bigs to take a redshirt year this season.

What are the highlights of Penn State’s non-conference schedule?

You could call playing Kentucky on a neutral court a highlight, but I’m not excited to watch a 25+ point beat down. There are 6 games I’m looking at that will really help this young squad get better – Long Island, vs. Old Dominion/South Florida, at St. Joe’s, at Boston College, Ole Miss, and at Duquesne.

Boston College and Ole Miss lose a lot while the others are strong mid-majors.

All of these games are winnable in my opinion against comparable opponents. They certainly won’t win them all, but their record in these 6 games will be a nice benchmark for the rest of the season. That’s not to say if Penn State does win all of them, they’ll be a contender in the Big Ten. But if they have a winning record in these games, I’d expect some questions will have been answered about this team and 3-6 conference wins could be on the table in the youthful Big Ten. If they don’t, they’ll likely be the less than 3 win basement dweller this season that everyone expects them to be.

Will your team win its ACC/Big Ten Challenge Game? It’s a toss-up. I don’t think it’s fair to expect this team to win road games, but Boston College lost more than Penn State did from its team last year.

Most feared player? Jordan Taylor. He’s got the ball in his hands more than Sully, and we saw his ability to take over games in spectacular fashion.

Surprise player? This is really tough because so many great players left such a void in league that there are a ton of opportunities on each team for breakout players. I’ll go with the safest pick, DeShaun Thomas.

Surprise team? I don’t think Indiana counts, because they’re expected to move up this year. I’m going Nebraska just because nearly everyone thinks they’ll finish 11th, just in front of PSU. I think they have some players and with the league being so open in the middle, they could finish in the middle of the pack.