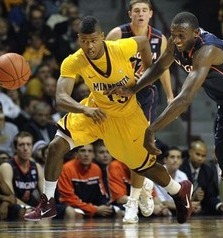 The next feature in our Around the Big Ten preview series of Q&As, Jonathan Foster from FromTheBarn stops by to discuss Minnesota’s team this season.

The Gophers lost 10 of their final 11 games last season despite a promising non-conference start. What are the expectations for this season in Minneapolis?

With so many new faces on the team, the only real expectation is to not lose 10 of the final 11 games. The Big Ten should have something of a down year, with the departure of so many of last year’s best players, so finishing in the top half of the Big Ten is a goal. But no one would be shocked if the Gophers slide off the bubble into the NIT. But hey, that is better than last year, and better than most other teams in this town in the last year.

Breakdown the departures and additions for Minnesota this season. Which freshmen are expected to make an impact?

The starting back court of Al Nolen and Blake Hoffarber graduated. Colton Iverson transferred to Colorado State. Dominique Dawson, a walk-on who played towards the end of the season was able to secure a Division II scholarship and is enjoying a free education. Andre Hollins, who scored 46 points against Findlay Prep last season, should be in the mix at either of the starting guard spots. Joe Coleman, former Gopher Dan Coleman’s younger brother, was Minnesota’s Mr. Basketball and is aggressive with great instincts and has a chance to start as a shooting guard. Oto Osenieks may be the team’s best three-point shooter, and is a good ball-handler for a 6-foot-8 kid. While not a freshman, Julian Welch, a junior college transfer and former Big West player of the year at UC-Davis also has a chance to start at a guard spot.

Trevor Mbakwe was dominant in his debut season for Minnesota – scoring, blocking shots and grabbing rebounds – how can he improve this season?

On the court, he needs to make some free-throws. He shot about 63% from the line, which isn’t shockingly awful, but when you take into account his 202 attempts, there are too many points left off the board. If he could improve to a 70% shooter, defense might be more reluctant to foul, and at least he’d score a few more points. If he could be more comfortable shooting from 10-12 feet, he would be nearly impossible to stop.

Rodney Williams probably has as much potential as anyone in the league, is this the season he finally puts it all together?

This year he’ll get closer, but he’ll still be a year away. During his freshman year, he had no idea what he was doing. During his sophomore season, he knew what he needed to do, but didn’t quite know how to do it. This year, with an off-season of knowing what he needs to work on, we should see a modest improvement. I don’t think it is out of the question that he’ll score around nine points with five or six rebounds. The grand plan for this year is for the Gophers to get out and run more, which is where Rodney excels. If that comes to fruition, the numbers should be better. If injuries and other attrition occur again and he’s stuck playing out of position in a half-court offense, more than a few people will consider him a bust.

Minnesota’s turnover woes last season can’t be overstated. Those problems were obviously magnified by injuries but how can Minnesota improve on those struggles from a year ago?

A lot of teams turn the ball over too often on offense, but few of those teams struggle so mightily at creating turnovers on the defensive end. Having multiple players who are comfortable with the ball in their hands should help on offense. Pressing more often has to create at least a few more turnovers. How bad was it last year you ask? The Gophers ranked 299th in defensive turnover percentage last season, worse than bluebloods like Presbyterian, North Dakota State, and something called Longwood.

None of Minnesota’s returning guards necessarily stood out last season, which backcourt players do you expect to step up this season?

It was only a scrimmage, but Maverick Ahanmisi was something of a revelation on Friday night (at Minnesota’s Midnight Madness). He looked to be in better shape, quicker, made a few nice defensive plays, and made four three-pointers. It was probably won’t happen again, but a lot of people took notice. Chip Armelin, who is something of a much shorter Rodney Williams, should benefit from an up-tempo offense. Austin Hollins will see a lot of playing time due to his length and ability to do everything other than shooting well enough to stay on the court.

What are the highlights of Minnesota’s non-conference schedule? How do you expect the Gophers to fair?

The Gophers bring two BCS conference, Virginia Tech and USC teams to The Barn for the first time in Tubby Smith Era.  They also face historically decent teams such as Bucknell and Fairfield. They’ll also play in the Old Spice Classic with a likely match-up against Dayton if both teams win a few. With USC’s injury problems and Virginia Tech’s coaching problems, it wouldn’t be shocking if the Gophers entered the Big Ten season undefeated.  With such a young team, they’ll probably drop one or two of those games.

I should preface my answer to the final question with a caveat that this is based on the assumption that half the team won’t be on the bench or searching for greener pastures by the end of the season.

Projected record? I think the Gophers will drop one non-conference game and finish the Big Ten season 9-9 .It helps not playing at Ohio State and Purdue.

Will Minnesota win its ACC/Big Ten Challenge Game against Virginia Tech? The Gophers should beat Virginia Tech at home, which may be the earliest bubble buster in NCAA history.

Most feared player?Jarred Sullinger was feared when he was on the jiggly side. Now he is terrifying.

Surprise player? Aaron Craft should put up much better numbers with more opportunities to shoot.

Conference Champs? Needless to say, the engravers should get started on the annoying “THE” for when the Buckeyes win the conference title.

Surprise team? I don’t think Illinois will be elite, but they’ll be better than last year despite the talent level that has recently departed.