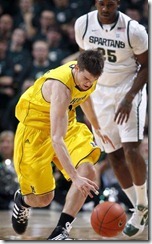 Stu Douglass is the most polarizing player to discuss on the Michigan basketball team. Common perception of players like Tim Hardaway Jr., Zack Novak or Evan Smotrycz is relatively homogenous. Everyone agrees that Hardaway is great player, recognizes Novak’s leadership while accepting his limitations and understands that Evan Smotrycz can shoot but needs to improve his rebounding. When it comes to Stu Douglass, most fans seem to be completely focused on his positives or negatives, there’s no middle ground or understanding.

Now a senior, Douglass has been Michigan’s designated perimeter shooter for the last three seasons while averaging around 150 three point attempts per year. Despite holding that role, he’s a relatively pedestrian, 34 percent, three point shooter over the course of his career (Fr: 34%, So: 33%, Jr: 36%). Considering the top 16 three point shooters in the Big Ten last year made more than 38% of their threes, it’s tough to apply the “shooter” label at this point in Douglass’s career.

Douglass’s career statistics don’t pop off the page. He’s scored in double figures for less than one third of his career games, has never averaged more than seven points, three rebounds, two assists and never compiled an offensive rating over 100 in any single season. Despite his seemingly mediocre statistical resume, he’s on pace to rank near the top 5 in both minutes played and three pointers made in Michigan history.

He’s also had his fair share of program altering shots and memorable games. His NBA-range three point shot against UCLA and step-back jump shot in East Lansing are easily among the top five biggest shots during the John Beilein era in Ann Arbor. His two hand dunk versus Tennessee and 20-plus point outbursts at Connecticut or against Harvard weren’t bad either.

Now a senior, what should be expected from Douglass? How will his role adjust with a new mix of backcourt talent? And how will his career be remembered?

The first storyline to watch is where Douglass plays and who he plays with early in the season. John Beilein’s offense enables flexibility in this situation because of the similarities between the one and the two positions. Douglass’s experience in the offense makes him a great backcourt mate for either of Michigan’s freshmen guards. His offensive game complements Brundidge’s offensive game extremely well and his defensive abilities would relieve some defensive pressure off both freshmen. Zack Novak, the presumable starter at the two guard, is not as nice of a complement. Both players are three point shooters first and don’t excel going toward the basket or creating for others. An ideal backcourt rotation would pair Douglass with a freshman guard as often as possible, perhaps looking something like this:

The next question is what sort of statistical production can we expect from Douglass this season. Can he increase his assist rate, which has declined each year he’s been in Ann Arbor, or can he improve his three point shooting percentage toward 40 percent.

Bottom line: I’m confident that Douglass will build off last season (the best of his career) individually but he’ll need to carve out a niche. I expect him to start the season as the sixth man but, if he defends like he did down the stretch last season, he’ll be on the floor closing games. Look for his three point shooting numbers to increase another 2 percent up to around 38 percent and his assist rate to bounce up closer to 20 percent (from 10 a year ago).