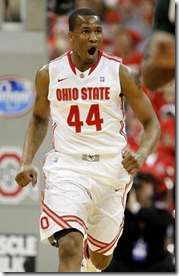 Bob Baptist from the Columbus Dispatch joined us for the next installment in our Around the Big Ten preview series featuring question and answer posts with various journalists and bloggers covering Big Ten schools. (Previously: Penn State, Minnesota)

1. Jared Sullinger, Will Buford and Aaron Craft all played major roles on last year’s team and will all but assuredly start. What about the other two spots, what players are most likely to step in for David Lighty and Jon Diebler?

At this point, before I’ve seen the team practice or play a game, I’ll guess Deshaun Thomas will start at the 3 and freshman Amir Williams will start at the 5. I’m not sure how much Williams will end up playing, but he will supply a defensive backstop while also allowing Sullinger to start games at the 4. Williams is athletic and can run the floor, from what I’m told. The question is, is his body ready to hold up against high-major teams like Duke, Kansas and much of the Big Ten. I was told he has put on 20 pounds since he arrived on campus in July; whether that’s enough, we’ll see. Thomas’ body transformation wasn’t as dramatic as Sullinger’s during the offseason, but he dropped 10 pounds and redistributed the rest. Most important for him is that he "add a motor," which is what coach Thad Matta told him he needed after last season. If he does, he could be very productive, because he showed glimpses of it last year both scoring and rebounding.

2.  Sullinger has slimmed down significantly from last season. How does that affect his game and what do you expect to see out of him this season? In what areas can he improve?

Jared said on media day that he weighed 265, which is 20 pounds lighter than he said he was a year ago this time. He said the biggest thing that’s improved as a result is his feet, which were good already. They’re even quicker now, which will help him play power forward against lighter, quicker opponents. Carrying less weight also will help his stamina late in games and late in the season, when he really dragged last season as he played heavy minutes in elimination games. The two biggest things he needs to improve, in my opinion, are guarding his man and, when he’s in the post, creating more space for himself close to the basket so his shot isn’t blocked. He isn’t a great leaper, he may never be, so he needs his space to score over longer opponents.

3. Ohio State has the number one recruiting class in the Big Ten once again, which players do you expect to make an immediate impact?

The one I’m told would have made the biggest impact isn’t in Columbus right now: LaQuinton Ross. He was very impressive during the summer, according to guys I talked to who either saw him or played against him, and may have been good enough to start on the wing. But the NCAA ruled in late September that two grades he received as either a freshman or sophomore in high school in Mississippi were erroneously changed during a grade-scale change that occurred after he left for a prep school, and that two C’s he was credited with were actually D’s. That, combined with his entrance-test score, made him ineligible to receive a scholarship from Ohio State, so he had to pack up and leave school in a matter of hours. He’s back home in Jackson, Miss., where, according to his former prep school coach, he will attempt to satisfy his core-course requirement online and take the ACT and SAT again. If he gets a qualifying score this time, he could be back at Ohio State, and eligible, as soon as Dec. 9, the day after fall quarter exams end — and the day before the Buckeyes play Kansas.

As for the other freshmen, I’m expecting Williams and point guard Shannon Scott to have regular roles. I would expect Scott to come off the bench early in games, as Craft did last year, with Craft sometimes shifting off the ball. Scott, the son of former North Carolina and NBA star Charlie Scott, is a Matta-style point guard in the Mike Conley mold. I don’t know what to expect from the remaining two freshmen. Sam Thompson is a freak athlete but the wing positions have a lot of competition. Trey McDonald will be the fourth big man, behind Boston College transfer Evan Ravenel. Matta said on media day that he is more open this year than he usually is to redshirting, especially with him yet to get a commitment in the class of 2012. So we’ll have to wait and see how that shakes out.

4. Will Buford has been a productive player for three seasons in Columbus but it feels like he’s never truly emerged as a star. Is this the year he breaks out? What’s his ceiling?

Will has a lot of talent and has played on teams with a lot of talent, so he’s just been one of the cogs in the machine. I think he’ll score more this year because he may have to, especially with Sullinger seeing a double-team every time he touches the ball. Better shot selection is something to look for. Buford always has been a guy who takes about a dozen or more shots per game to get his points. I’d hope he can score more this year while taking about as many shots and becoming a better all-around player as far as rebounding and assists are concerned. He has said a number of times since March that he thinks about the loss to Kentucky every day. He shot horrifically in that game, and has said since he thought he was selfish for continuing to shoot when it wasn’t going down for him. That’s a good sign from the only senior on the team who a lot of others are looking to for leadership.

5. What are the highlights of Ohio State’s non-conference schedule?

Florida and Duke at home, Kansas and South Carolina on the road. Other than that, nine made-to-order wins.

6. Two things that Ohio State did better than any other Big Ten team: shoot and win the free throw battle. What are the odds that the Buckeyes are that effective in both departments this season, if they aren’t where can they improve to compensate?

It’ll be difficult to shoot as well as last season’s team, what with Jon Diebler bettering 50 percent from behind the arc and Dallas Lauderdale dunking three of every four shots. If they don’t shoot quite as well, they could compensate by getting second chances. Sullinger and Thomas could be prolific offensive rebounders. They also could compensate by being even better on defense. Matta has the horses to go deep into his bench if he wants, and a deeper team means one that will pressure more on defense.

They should continue to win the free throw battle because, 1, Sullinger, and 2, they don’t foul a lot. None of Matta’s teams ever have. They drill on playing defense without their hands. Fouling to Matta is a sign of laziness or lack of conditioning.

Projected conference record? Let me see, my first quick run through the schedule yields … 14-4. As always, subject to change.
Will Ohio State win its ACC/Big Ten Challenge Game? Yes. High-level game against Duke will be decided by home-court advantage.
Most feared player (in the Big Ten)? Jared Sullinger (Jared Sullinger). Is there any doubt?
Surprise player (in the Big Ten)? Shannon Scott (Branden Dawson). I really have no idea on this one.
Conference Champs? Ohio State. But Buford, Sullinger and Craft can’t do it alone. Who are the role players going to be?
Surprise team? Iowa. I like their experience, their tenacity, their coach … and Basabe. They have to learn how to steal some road wins.