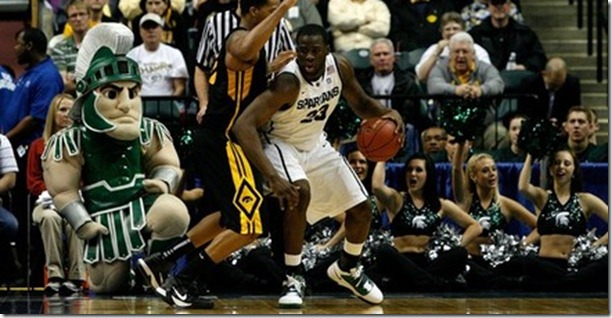 Our fourth and final Position-by-Position piece focuses on the conference’s diverse collection of combo forwards. Whether they play inside-out or outside-in, combination forwards with size and skill have become a mainstay in modern college basketball. Some of the league’s most talented players are in this group but it’s also a very top heavy group with a number of unproven commodities in the bottom half of the top 10. [Previously: Guards, Wings, Bigs]

Upside: Green racked up two triple doubles last season, including one in the NCAA tournament, and is among the league’s most versatile players. He’s a tenacious rebounder and a smart passer but has proven he can score as well.
Downside: Green continues to slim down and proved that he can hit the three point shot last season (37%) but really struggled inside the arc, especially with the 10 to 15 foot jumper.

Upside:  When he’s healthy Hummel deserves to be grouped with Jared Sullinger and Jordan Taylor as one of the conference’s top three players. He can score inside and out, get to the free throw line and doesn’t turn the ball over. He’s also a prolific defensive rebounder and gets after it on the defense end.
Downside: After two season ending knee injuries it’s impossible to know how healthy Hummel is and whether he can stay healthy for the entire season. For now, Hummel says he feels great.

Upside: Shurna’s awkward looking shooting stroke and skinny frame don’t pass the look test but he’s plenty productive in the Northwestern offense. Shurna made 43 percent of his threes and 52 percent of his twos last season while averaging nearly 17 points per game.
Downside: Shurna loses his point guard from a year ago which will likely cause Northwestern’s offense to take a step back. He’s also not the same caliber of rebounder as both Green and Hummel above him.

Upside: Watford improved significantly between his freshman and sophomore seasons and was one of the bright spots offensively for Indiana. He is a more than capable three point shooter and does a great job of getting to the free throw line and converting.
Downside: Watford made just 38 percent of his twos in Big Ten games and will need to be more efficient inside the arc for Indiana to make a jump. His defensive effort has been up and down throughout his career and will have to deal with Cody Zeller racking up shots next to him in the frontcourt.

Upside: Thomas didn’t play a lot of minutes as a freshman but he made the most of his time on the floor. He took a lot of shots (31% of OSU’s shots while on the floor) and was surprisingly efficient, making 54 percent of his twos and 33 percent of his threes.
Downside: Thomas struggled on the defensive end of the floor last season and didn’t earn a whole lot of playing time despite playing for an Ohio State team that wasn’t all that deep. He’ll need to play consistently on both ends in an increased role.

6. Mike Bruesewitz – Jr. – Wisconsin
Bruesewitz ended the season on a high note with a strong performance in the NCAA tournament and is likely to take a major step forward with opportunities available in the Wisconsin front court.

7. Evan Smotrycz – So. – Michigan
Smotrycz showed off his three point stroke last season and has reportedly added significant weight, if he’s able to add rebounding to his game he should take a major step forward.

8. Tyler Griffey – Jr. – Illinois
Griffey struggled last season but he was the No. 2 scorer for the Illini during their trip to Italy this summer. He’s one of the few experienced front court players for Illinois and could be in line for early playing time.

9. Mike Shaw – Fr. – Illinois
One of the more highly regarded prospects in Illinois’ freshman class, Shaw is an inside-out forward that has the tendency to drift to the perimeter.

10. Jarrod Uthoff – Fr. – Wisconsin
Wisconsin needs to find young playmakers in the front court sooner than later and the scouting report on Uthoff seems to fit the Bo Ryan mold. He’s 6-foot-8, athletic and runs the floor well with the ability to step out and hit the perimeter jumpshot. Uthoff was a top-100 recruit and should have every opportunity to make an early impact in Madison.