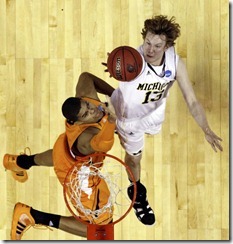 The differences between Michigan and Tennessee were striking as both teams ran onto the floor at Time Warner Cable Arena for their round of 32 NCAA tournament game last March. The Vols were markedly bigger and stronger at almost every position. As Michigan struggled with Tennessee’s size and athletic advantage early, missing 12 shots in the first eight minutes and falling behind by a four point deficit that felt larger, it was Matt Vogrich that arose as the unlikely hero. The 6-foot-4 skinny sophomore with floppy hair  checked into the game and provided Michigan with an immediate shot in the arm.  He scored on an array of three pointers, backdoor layups and fast break steals while keeping Michigan afloat in the first half. That was enough to get the Wolverines to the second half where they went on to dominate the game.

When all was said and done, Vogrich’s season high 11 points in that NCAA victory left Michigan fans wondering what the junior guard could be capable of in the future. He was shooting the ball with confidence, finishing around the basket and finally showing signs of being the player many expected out of high school.

The backcourt is crowded and no one is quite sure where Vogrich will fit into the lineup but if he can provide the sort of energy and shooting ability he showed against Tennessee, there’s little doubt that John Beilein will find a spot for him on the court.

Reasons to be optimistic

Reasons to be skeptical

This season will be critical for Vogrich’s development. He could be Michigan’s best option off the bench, or he could slip farther down the lineup if Brundidge and Burke demand more playing time. He’ll have every opportunity to fight for playing time but he has to continue to shoot the ball consistently while diversifying his game.

Vogrich played both the two and the three last season which should help maximize his opportunities in various lineup combinations. He’s the most natural candidate to back up Hardaway at the three position but minutes at the two position might be harder to come by. Novak, Douglass and Brundidge will all be fighting for minutes at the two despite all having the possibility to play elsewhere.

At the end of the day there are two primary scenarios that would enable Vogrich to increase his playing time this season – he elevates his game significantly or Michigan’s freshmen struggle.

Bottom Line: John Beilein needs shooters and Matt Vogrich is the the most proficient returning three point shooter. That fact alone will earn Vogrich an opportunity this season and if he’s hitting shots then you can bet that Beilein will find a way to get him a few more shooting opportunities.

Whether it was the Tennessee game last year or against Ohio State as a freshman, Vogrich has proven that he is comfortable coming off providing energy off the bench. While you can’t quantify energy on the statsheet, you can expect improvements in other statistical areas – Vogrich’s scoring output should jump a couple points to around five points per game and his three point shooting should see a rise above 40 percent.