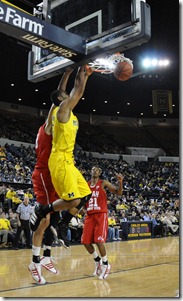 Jon Horford was the number eight man in Michigan’s rotation last season and played fewer than seven minutes per game. Despite his limited playing time, the sophomore big man is regarded as the most likely breakout player on Michigan’s roster.

Horford has the bloodlines – his brother exploded between his freshman and sophomore seasons en route to two national champions and the NBA. He demonstrated his potential, including a big dunk during Michigan’s NCAA tournament loss to Duke, and has added strength to his already long and athletic frame. Despite the positives and obvious potential, we’re still talking about a guy who played 19 minutes and scored 3 points during Michigan’s final 13 games combined. The sample size is small but here’s a closer look at what Horford could be capable of this season.

A year can make all the difference but it’s also no perfect barometer. There’s no telling when the light goes on and everything starts to makes sense.

He has the physical tools and ability to make an impact on the floor but the hours in the gym and added strength mean nothing until they translate to game days. The million dollar question is whether the game slows down for Horford and he begins to cut down on costly mental mistakes.

Bottom Line: Jon will get his chances, especially early on, but he’ll have to make the most of them. Jordan Morgan should improve and is capable of playing more than 24 minutes per game if he can avoid foul trouble. Evan Smotrycz played significant minutes at the five position last season, has added strength and is being lauded for his rebounding ability early in practice. Opportunity is there but there’s not a massive void waiting to be filled.

An improved Horford is the best case for Michigan as he would round out a Michigan frontcourt with a consistent defensive option. If Horford is outplaying Morgan and Smotrycz that means the front court is probably good enough to compete with most teams on the schedule. If Michigan is still forced to slide Smotrycz to the five position when Morgan gets into foul trouble then the Wolverine front court depth is still not where it needs to be.