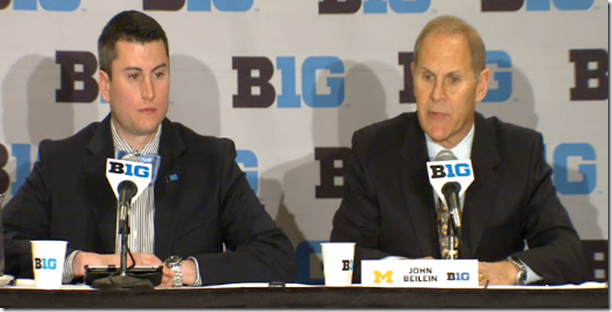 COACH BEILEIN: It’s hard to believe that it’s been already five years to have the privilege of coaching at Michigan. We love practicing with this team right now.
We have an incredible team-first attitude that’s been very healthy so far. And now we’re a couple of weeks away from the start of the season. So we love the young men on our team.
The most difficult thing will be replacing Darius Morris and all the intangibles that we had last year as a team that was really playing with a chip on their shoulder. So we’re working hard at that. And I like the progress so far.

Find the full transcript after the jump and we’ll have more coverage from Media Day in the coming days and hours. Make sure to also follow along with our Live Blog as well.

Q. How close to the start of the season do you think you’ll choose a starter for the point guard position to replace Darius Morris?
COACH BEILEIN: You know, we have a scrimmage coming up. We have an exhibition game coming up. That will be a big part of it. And then every practice there’s an opportunity for me to evaluate.
So I would think about that, the three or four days before our first game with Ferris State on a Friday night, we’ll probably choose that just the week of that game.

Q. Can you talk a little bit about the improvements to Crisler Arena, what that’s meant both in terms of recruiting and just the players you have right now and also the play itself on the court, I think Coach Borseth talked about the painting of the roof, making it seem a little brighter in there?
COACH BEILEIN: Yes, there’s been two things going on. First of all, the Crisler improvements are striking. There’s just — you just walk into it, you feel like it’s a brand new arena.
And it had aged quite a bit. It’s a wonderful building for Michigan basketball for a long time. But Cazzie Russell being inducted into the NCAA Hall of Fame, that’s the last time it was probably updated was when they built it.
So it’s been really nice for our kids. I think they feel good about themselves when they’re out there. The other thing, with our player development center, our practice facility, is all but completed. It’s two weeks away. We’ve actually moved into the offices. That’s going to lead into so much more efficiency how we operate every day.
So it’s a very — it’s a good environment right now to grow as a basketball program.

Q. How do you think Hardaway is going to react to defenses really keying in on him this season as him being the focal point of the Michigan offense?
COACH BEILEIN: You know, we had an early answer on that the other day. We just had a scrimmage where he was so unselfish he had seven assists and no turnovers in a scrimmage.
And just he sees the open people almost sometimes to a fault, where if they’re putting extra men on him or guarding him a certain way, this is a team-first guy now.
So he’s been really — he’s fairly comfortable in that. I think obviously he’s still young. He’s 19 years old. He’s still young. His body is developing. But, still, he’s going to have a lot of bumps in the road, because you have to guard him.
But he realized that’s part of the journey himself to reach his goals of being a great Michigan basketball player and then playing afterwards.

Q. Two years ago there were more expectations in the program with Manny Harris and additional players coming back, how is this year different than those expectations and how that season turned out?
COACH BEILEIN: I think that one of the things that happened in that season was injury to Manny Harris earlier in that season. The expectations were very high, but Manny never really got to 100 percent, we felt, the entire year.
And we were probably more dependent on he and Deshaun and the rest of the pieces were not complete yet. I think that we can — if those two did not have a good game, we had a very difficult chance of winning.
This team, I think, has where the talent, those two are extremely talented players, this team may have a few more pieces, and I think we have a great team chemistry on the team as well, that hopefully a lot of intangibles going into winning. We hope we possess as many as you would need.

Q. Where does Trey rank among the other freshmen in the Big Ten as far as being able to play right away, with Zeller and those other big-time freshmen?
COACH BEILEIN: I have no idea about the other freshmen. I just look at my team — you have to look at the rotation and how many veterans they have coming back. He’s walked into a great situation with Darius Morris leaving, as far as him personally.
At the same time, there’s a lot that goes on from going from a high school guard to a college guard. So after two weeks of practice, he’s shown a lot of moxie, some great poise. And yesterday, the other day, in particular, a lot of toughness.
Those are three things you’d like to have a freshman have. Usually that takes a few years for them to accumulate some of those traits. He showed last week some really positive things in those areas that are beyond his ability to make a jump shot or make a play.
And so we’re hopeful he’ll continue that trend.
THE MODERATOR: Thank you, Coach.

Other coaches press conferences can be found at ASAP Sports.