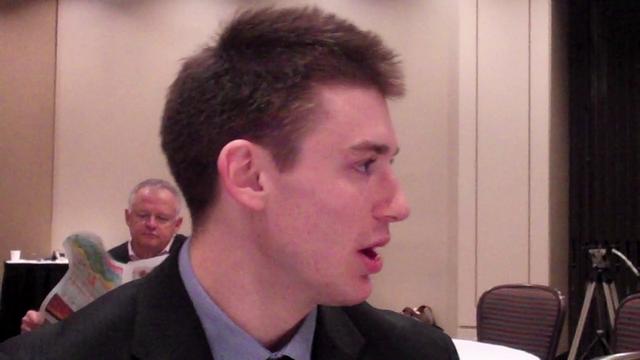 Footage of Hardaway along with several additional quotes after the jump.

U-M Senior Guard Stu Douglass
On what it means to represent Michigan at Big Ten Media Day … “It’s an honor. There is a lot of great talent here with all the great players. To be associated with that is a huge honor, but really the goal is to get Michigan associated with the top of the Big Ten and carrying on that tradition — that’s the ultimate goal.

On what he wants people to know about Michigan basketball … “Obviously that we are a tough team — you’re got to be a tough team in the Big Ten if you want to be successful. But we also want people to know that we can score points — we can get out and run. People associate coach Beilein’s offense with being slow and we want to kind of break all those stereotypes and have a run brand of basketball that people love to watch.”

On his most commonly asked question at media day … “The most commonly asked question was about how we’re going to handle the point guard position and how to replace the productivity that Darius (Morris) had. I told them every time that collectively we’re going to have to come together. It’s not just going to be one or two guys creating now. We want three or four guys getting in the lane and creating and being productive.

U-M Sophomore Guard Tim Hardaway Jr.
On attending his first Big Ten Media Day … “It means a lot for me to be here. I feel like I am the youngest person throughout the entire room. Being in here with this group of guys is awesome. The experience I had last night talking to them and today has been very fun.”

On what’s to come for Michigan basketball this season … “We’re just trying to get the message out that Michigan is almost back to where it needs to be, but we still have a long ways to go to get where the team was in 1989 and when the Fab Five was here. We think about that every day and just trying to go out there and play hard.”

On being excited to start the season … “I’m ready to play. I’m ready for this week to get by and to get on the court with my freshmen and my two seniors.”