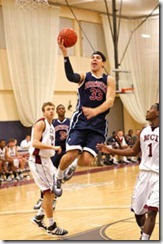 The Mitch McGary recruitment is finally reaching an end. Scout.com’s Brian Snow first reported ($) that plans have been made for McGary to announce his college decision on Thursday. Adam Zagoria reached Mitch’s father who confirmed that the announcement would be televised by ESPN’s family of networks.

ESPNU’s Recruiting Nation program is scheduled to air at 5 p.m. on Thursday evening.

McGary will decide between his final three schools of Duke, Florida and Michigan. The Wolverines have been considered the front runner for McGary’s services for the greater portion of the last month – a sentiment that’s been echoed nationally and locally. However, nothing is ever final in recruiting until the ink is dry on the letter of intent and some of the best recruiters and schools are still in the picture.