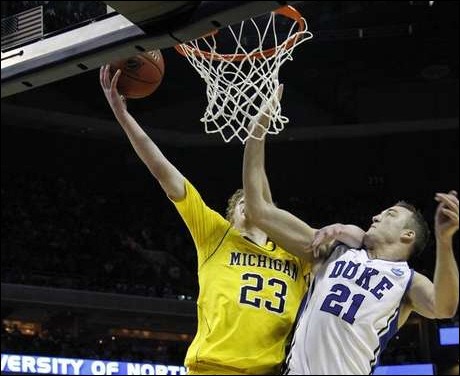 Smotrycz had an up-and-down freshman campaign but when he played well, Michigan played well. The Wolverines were 7-2 when Smotrycz reached double figures and those two losses were to Duke by two points and Ohio State by four points. The Wolverines were capable of winning games without Smotrycz but when the combo forward was hitting shots he added that ever necessary peripheral scorer to supplement their more consistent primary options.

At 6-foot-9 with a deft shooting touch, Smotrycz has always been a perfect fit for Michigan’s perimeter oriented offense. He wasn’t an instant star but he started 24 games as a true freshman and appears to be the Wolverine most likely to break out this season.

Reasons to be Excited

Early reports on Evan Smotrycz from practice have been glowing. He’s playing more consistently and at a higher level which is exactly what Michigan needs. In an ideal world Michigan would play Zack Novak primarily at the off guard which means Smotrycz will be provided ample opportunity at the four.

As has been discussed, Michigan needs to find a secondary scorer to supplement Tim Hardaway Jr. Jordan Morgan and Evan Smotrycz both used roughly 21 percent of Michigan’s possessions last season – fewer than Tim Hardaway Jr. but more than all other returnees. Stu Douglass and Zack Novak each used about 15% of the team’s possessions during their first three seasons, and are unlikely to see a large increase in their offensive roles as shooters.

Morgan should hold steady around 21 percent, with most of his opportunities stemming from the pick-and-roll, and true freshman point guard Trey Burke will pick up a chunk of the offensive workload. Because Smotrycz plays a prominent offensive role on the wing he is the most likely candidate to see the largest increase in offensive opportunities.

The signs of improvement – correctable problems, strength gain and opportunity – are there. Now it’s up to Smotrycz to make the most of them and produce on the floor. Combining the positive play that he demonstrated down the stretch last season with early results in practice, it doesn’t seem that far fetched to see his scoring output surge into double digits. On the other hand, if he continues to struggle on the glass and defensively then Michigan is likely to continue to utilize its small line-up with Novak at the four position more often than it would like.