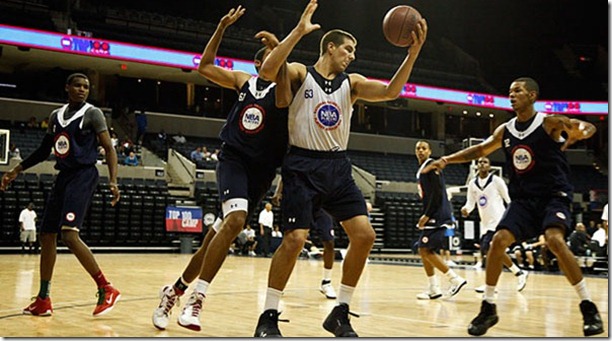 Depending on who you talk to, Mitch McGary is the best big man and the second or third best player in the class of 2012. Despite his lofty ranking, the second most popular question that I’ve heard this fall (after “will Michigan get McGary?”) is just how good is he really? A ranking is one thing, but what does he bring to the table at the next level.

On the eve of McGary’s announcement – scheduled for Thursday at 5 p.m. on ESPNU – we take a closer look at McGary’s strengths and weaknesses from the summer circuit. There’s endless highlight and scouting video of McGary out there on the internet but here’s our first hand impressions of McGary as well as some quality hand selected reports from other outlets this summer.

For my money, the best 5-minute run of any player at camp belonged to Mitch McGary(Wolfeboro, N.H./Brewster). His camp team, masterfully coached our own Paul Biancardi, came back from the dead to win a game at the buzzer. In the second half, there was a stretch when McGary was in beast mode.

The lefty is a man in the lane and the other guys know it. He’s a feared competitor who owns touch and has a passion for punking people at the rim. You play in rotations at camp but McGary begged to get double-shifted by his coaches. You want this guy on your team.

It is difficult to find players who bring all-out effort and energy on a consistent basis, but McGary does it better than anyone. Not only does he bring energy to his own game, he gives it to his teammates. His motor never stops as he constantly works the backboard, runs the floor and dives on the floor for loose balls. His enthusiasm even carries over when he’s on the bench as he cheers on his teammates and remains vocal. McGary has talent and physical tools, but his motor makes him special and will make him money one day.

What a total animal this guy played like on Friday. First, the five-star big man broke Texas PRO in the first half with his ill-tempered length-of-the-court drives and rebounding, and he was able to rest himself for the championship after racking up 14 points and 16 boards. Then, looking as fresh as he would if he was playing his first game of the summer, he went out and dominated the paint in SYF’s win over Dream Vision in the championship game. Bottom line, McGary is a competitor with a non-stop motor, great hands, great skill and even greater will.

John Stovall at the adidas May Classic:

“He is a big, strong bully in the paint who reclassified about a year ago and has become a true force inside. McGary has increased his skill level a great deal, is effective handling the ball some on the perimeter and has improved his outside shot. You would prefer him scoring in the lane, but he can step out and make jumpers to 19 feet. He has a tremendous motor, which could be his best asset and McGary has made himself one of the top talents in the 2012 class.”

McGary’s uncanny combination of size, strength, athleticism and coordination is extremely impressive because it allows him to do so much on the court. He loves to rebound the ball and push it up the court himself. He attacks the basket with a nice face-up game, although it’d be nice to see him play more with his back to the basket.

His decision making needs work as he often tries to do far too much before turning the ball over.He also tends to float to the perimeter a bit too much and loves to settle for jump shots despite having the tools to get a much better look at the basket. Overall, McGary was extremely impressive and he is on the verge of blowing up if he hasn’t already. The lefty’s flaws are correctable and easily outweighed by his size and talent.