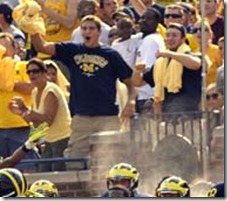 Exactly two months after his official visit to Ann Arbor, Mitch McGary verbally committed to John Beilein and the University of Michigan during a nationally televised announcement on ESPNU.

McGary, the No. 2 recruit in the nation, joins Glenn Robinson III and Nick Stauskas as the third member of Michigan’s 2012 class. The nation’s best big man measures 6-foot-10, 250 pounds, and chose the Wolverines over Duke, Florida, North Carolina, Kentucky and Maryland.

McGary is a consensus top-3 recruit and is rated as a five star by every major scouting service. He’s regarded as the best big man on all three services. ESPN and Scout have him ranked second overall while Rivals.com ranks him third.

McGary settled on a top six of Michigan, Duke, Florida, North Carolina, Kentucky and Maryland but he earned offers from nearly every major Division I program. Arizona, Texas, Florida State, Indiana, West Virginia, Connecticut, Kansas, Memphis and Louisville were among the other notable schools involved at one point or another this summer.

Featured in a separate post: In Depth Scouting: Mitch McGary

Mitch McGary’s name first appeared on the Michigan recruiting radar in 2009. McGary, then a member of the 2011 class, was a junior at Chesterton High School and was receiving interest from Michigan and most of the Big Ten. He was well regarded – ranked in several top 100 listings – but at that point in his development, academics were the primary concern.

McGary’s struggles with ADHD have been well documented and it was a 2010 transfer to Brewster Academy that revived his career. Dave Telep quotes McGary’s AAU coach Wayne Brumm in this feature:

“Last June he told me he was going to quit and get a job,” Brumm said. “I knew that wasn’t what he meant. What he meant was that he was tired of being perceived to be dumb. That’s when I knew he had to get out of [Chesterton].”

McGary reclassified to the class of 2012 while improving both his game and his grades as Brewster’s sixth man last season. His improved grades made him a viable option to college coaches once again and his improved play propelled him to the top of almost every school’s recruiting board.

McGary was the fastest riser on the spring and summer AAU circuit. He was one of the most impressive performers at all of the notable All-American camps – the LeBron James and Amare Stoudemire Skills Academies, NBPA Top 100 Camp and Under Armour Best of the Best to name a few – and was equally as impressive in AAU events. McGary and fellow Michigan commitment Glenn Robinson III led their SYF Players squad to impressive finishes at numerous AAU tournaments, including a NY2LA Summer Jam Championship, and finished the year ranked 9th on the AAU circuit. When all was said and done, the once forgotten McGary was the country’s best big man.

Throughout much of the summer, there were times when McGary would fail to even mention Michigan when rattling off his lengthy list of suitors. But the Wolverines continued to stick to the plan: following McGary’s every move, working every connection

The message was received and the Wolverines earned Mitch’s first official visit. McGary followed the visit up with official trips to Duke and North Carolina but the Wolverines were declared the leaders. Duke, Kentucky, Florida, Maryland and North Carolina threw their best foot forward but John Beilein and his staff were able to weather the storm. Consistent trips to watch McGary play in open gyms and a timely in-home visit with his family back home in Chesterton proved to be enough – even after an original decision date was called off a month ago amid reports that McGary’s decision was “totally up in the air”.

Mitch McGary chose Michigan because he wants to make an impact. He doesn’t want to be another piece, he wants to be the centerpiece. He’s easily the most highly regarded recruit that John Beilein has ever landed and, perhaps more importantly, he’s a tremendous fit for John Beilein’s system on both sides of the basketball.

McGary is the sort of recruit that pundits argued Beilein would never land during his tenure in Ann Arbor. He’s a surefire All-American (although he’s ineligible for the McDonald’s game) and a likely one-and-done player. His defense, rebounding, athleticism and energy will make an immediate impact when he steps on campus. His ball skills will serve him well in a Michigan offense that stresses perimeter ability for every player, movement and inside-out play.

Michigan’s class of Mitch McGary (No. 2), Glenn Robinson III (41) and Nick Stauskas (81) is a top 10 class nationally and the second best class in the Big Ten at this juncture.

McGary will fill Michigan’s last remaining scholarship in the class of 2012 when he signs his letter of intent (as soon as next Wednesday, but he mentioned that he wants to sign with his family present). His commitment also means that the majority of Michigan’s 2011-12, 2012-13 and 2013-14 rosters are set. He is Michigan’s eighth commitment among the 2011, 2012 and 2013 classes who is ranked in at least one major scouting service’s top 100 ranking.

Look for more on McGary and Michigan basketball recruiting in the hours and days to come.