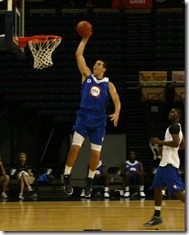 “I am excited about this new opportunity at Michigan, I wouldn’t go there if I didn’t think they could win a national championship.”

That was John Beilein in 2007 on the day he accepted the Michigan job. It sounded optimistic at best for a program that hadn’t made the tournament in nearly a decade and a coach whose reputation was built on Cinderella runs more than conference domination. Four and a half years later his plan appears to be coming together.

His first four years in Ann Arbor were far from perfect. The first season was worse than it should have been as a team with several talented players finished with one of the worst records in Michigan basketball history. The second was encouraging and rejuvenating, breaking a decade long NCAA tournament drought, but that goodwill was wiped away by a deflating and disappointing third season. Things spiraled downward throughout the first half of year four, bottoming on January 22nd with a home loss to Minnesota, but the climb back began with a trip to East Lansing.

Michigan was in the midst of a six game losing streak, hovering around .500 with a 1-6 conference record, and another loss to its in-state rivals would have served as the knock out blow to another disappointing season. Instead, the Wolverines scrapped their way to a win and haven’t looked back since. From that day on, both on the court (Michigan won 10 of its final 15 games) and on the recruiting trail, the Michigan program transformed.

It’s impossible to pin point one specific element that led to the transformation. You can credit Beilein for ceding control and allowing his new assistants a greater influence or you can credit Beilein for taking more control and revamping his entire assistant coaching staff before the 2010-11 season. Those new assistant coaches have been universally praised both for their player development – Darius Morris and Jordan Morgan are prime examples – and their recruiting prowess. Bacari Alexander, Jeff Meyer and Lavall Jordan have all played an instrumental role in at least one top-100 commitment since arriving on the job.

There’s also the construction in Ann Arbor. The Player Development Center is open for business and Crisler Arena is in the midst of a massive overhaul. In just a couple years, some of the conference’s worst facilities will transform into some of the league’s best. Gone are the days of sharing practice time with the women’s team or being relegated to the IM Building because of the annual Pow Wow in Crisler Arena.

If the win over Michigan State was the spark that triggered this perfect wave of momentum, McGary’s commitment is the kerosene to keep it burning.

Michigan basketball fans have been scarred from more than a decade of disappointment. The best way to summarize Michigan basketball in the aughts is constant cycle of hope and promise followed by disappointment, despair and frustration. Brian Elerbee brought in talented players who were more likely to end up on the police blotter than earn a diploma. Tommy Amaker did everything right but fell one recruit, game, shot or healthy ankle short – four times. It appeared that John Beilein turned the corner after making the tournament before the Wolverines fell flat on their face in 2010. As for recruiting? Big time commitments like Lavall Blanchard and Daniel Horton never quite reached their true potential while names like Joe Crawford, Malik Hairston, Al Horford, Patrick Beverley, Scottie Reynolds, Alex Legion, Casey Prather and Trey Zeigler remained etched in the memories of Wolverine fans.

Mitch McGary isn’t the first domino, he’s the final domino. John Beilein has already landed seven other top 100 players in the 2011, 2012 and 2013 classes – talented players in their own right – but McGary is the player that elevates Michigan from conference contender to national contender. On the court, McGary and his 2012 classmates join a team that could return as many as four starters. John Beilein’s best recruits to date will be competing for playing time with his most experienced and accomplished players in Ann Arbor.

Off the court the McGary commitment could be equally as important. His commitment will act as a catalyst toward Michigan’s newfound recruiting momentum. Recruits want to play with other top recruits and McGary’s pledge gives the Michigan coaches the cachet to walk into any living room and sell their school.

Now it’s time to sit back and enjoy the ride. It might have taken a bit longer than expected but John Beilein has his players and his program. Just one year after the program appeared to be on the verge of crumbling, the future and direction of Michigan basketball is as bright as it’s been since the mid 1990s.