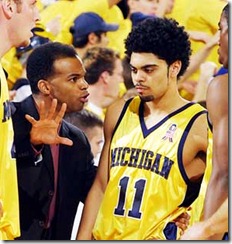 Michigan’s signing of the nation’s No. 2 recruit, Mitch McGary, prompted us to look back at some of Michigan’s top signings over the last 20 years. McGary is among the best of the bunch, but how will his career at Michigan compare to some of those previous highly touted Michigan prospects. Here’s a rundown of Michigan’s top recruits in the last two decades – the underachievers, overachievers and everything in between.

Chris Webber – #1, Class of 1991 – Webber was the #1 recruit in the nation coming out of high school and one of the most dominant prep players of the last 20 years. He was dominant at the college level with the Fab Five, being named an All-American and leading Michigan to back-to-back National Championship appearances. However, his story comes with a catch. There’s the time-out call against North Carolina in 1992 and of course the infamous Ed Martin scandal that scarred Michigan basketball for years. Webber and the Fab Five revolutionized the game as highly regarded prospects should but will be forever tarnished by their legacy.

Jerod Ward – #1, Class of 1994 – There’s an expectation that comes with being the #1 ranked player in the country out of high school—Jerod Ward, the top-ranked player of the class of 1994, never lived up to it. He was the focal point of the “Fab Five II,” which included Travis Conlan, Maceo Baston, Willie Mitchell and Maurice Taylor. In four years as a Wolverine, the 6-foot-9, 234 pound forward averaged just nine points and five rebounds per game. He never made it in the NBA.

Juwan Howard – #3, Class of 1991 – Howard was ranked just two spots behind Webber at #3 in the nation and some argued he should’ve been ranked #1. In the frontcourt with Webber, Howard’s numbers were not outrageous — 14 points and 7 rebounds per game — but in his junior season, with Webber gone, Howard averaged nearly 21 points and 9 rebounds per game before leaving for the NBA. Howard has demonstrated miraculous longevity throughout his career and is still playing in the NBA, most recently for the Miami Heat.

LaVell Blanchard – #6, Class of 1999 – The Ann Arbor native and Gatorade Player of the Year was the focal of Brian Ellerbee’s promising 1999 recruiting class. Unlike classmates Kevin Gaines and Jamal Crawford, Blanchard went about his business, stayed out of trouble and had a very productive career. Ranked as the sixth-best player in the nation out of high school, Blanchard went on to average over 14 points and 6 rebounds in each of his four years and was the only player in Michigan basketball history to lead the team in scoring and rebounding for four straight years.

Robert Traylor – Class of 1995 – The 6-foot-8, 300+ pound Traylor was a highly-touted, top-20 recruit out of Detroit. The “Tractor” was obviously talented and his backboard shattering dunks were impressive but will also forever be remembered for his part in the Ed Martin scandal. He averaged over 16 points and 10 rebounds during his junior year and was the sixth overall pick in the 1998 NBA Draft. In May, Traylor tragically died at age 34 after suffering a heart attack in his Puerto Rico apartment.

Jalen Rose – #6, Class of 1991 – Rose was ranked #6 in the nation out of Southwestern High School in Detroit. His freshman year at Michigan, he led the Fab 5 with 19 points per game and set the school freshman scoring record. He left the Wolverines for the NBA after his junior year with a career average of 17.5 points, four assists, and 4.7 rebounds. Rose has been active in his post-NBA career, working for ESPN, starting the Jalen Rose Leadership Academy, ruffling feathers by producing his Fab Five documentary and being arrested for a DUI.

Jimmy King – #9, Class of 1991 – Out of Plano East High School in Dallas, King was the ninth ranked player nationally. Other than Ray Jackson, he was the only member of the Fab 5 to stay at Michigan for four seasons. He averaged 10 points or more each season and had his best season, statistically, as a senior, when he averaged 14.8 points. Despite his talent and college production, King never managed to stick around in the NBA.

Louis Bullock – #11, Class of 1995 – Bullock, one of two high school All Americans (along with Traylor) to commit to Michigan from the 1995 class, was the 11th-ranked player in the nation. He went on to become one of Michigan’s all-time best scorers. He was one of the best — if not the best — 3-point shooters in school history. But Bullock also fell victim to the Ed Martin scandal, as all of his records have been wiped from the books.

Daniel Horton – #14, Class of 2002 – Horton took a leap of faith by committing to Tommy Amaker with sanctions looming and produced throughout his career but fell just short of his ultimate goal: the NCAA Tournament. He was named the Big Ten Freshman of the Year after averaging 15 points and five assists per game and led Michigan to an NIT Championship as a sophomore. He is also second all-time in school history in steals and 3-pointers made with 233.

Maceo Baston – #16, Class of 1994 – Baston, a 6-foot-9 power forward known for his incredible dunking ability and defensive prowess, came to Michigan ranked #16 in the nation — 2 spots in front of future teammate Maurice Taylor, and three spots in front of Willie Mitchell. Baston, unlike Taylor and Mitchell, played four years for the Wolverines, averaging 10.7 points and 6.6. rebounds. He was then selected in the second round of the NBA draft by the Bulls, but never really made any noise in the league.

Albert White – #16, Class of 1995 – White came to Ann Arbor ranked #16, part of the highly touted ’95 class with Traylor and Bullock. In his freshman season, White averaged 9 points and 4.7 rebounds and the future seemed bright. However, his involvement in the Ed Martin scandal (he is believed to have accepted around $37,000) along with frequent clashes with coach Steve Fisher prompted him to transfer to Missouri after just one season with the Wolverines.

Maurice Taylor – #18, Class of 1994 – Taylor, the 18th-ranked player of the class of ’94, had a solid career at Michigan; the 6-foot-9 forward was the Big Ten Freshman of the Year in the ’94-’95 season and finished his three-year career averaging 13 points and six boards per game. He was drafted in the first round of the NBA Draft by the Clippers, but Traylor remains famous for his role in the car crash that led to the investigation of the Ed Martin scandal.

Willie Mitchell – #19, Class of 1994 – The 6-foot-8 Mitchell was the Michigan High School Player of the Year as a senior, was ranked 19th in the nation and led Detroit Pershing to two state championships. Hampered by injuries, Mitchell never had much of an impact on the Wolverines. After an unsuccessful first two years at Michigan, he transferred to UAB.

Kevin Gaines  – #21, Class 1999 – If Kevin Gaines’ numbers at Michigan were nearly as impressive as his blood alcohol level on the night of Sept. 4, 2000, he would’ve been one of the best players in Michigan history. Gaines, the #21 recruit in the nation and part of a loaded 1999 recruiting class. His career fell apart when he was arrested for drunken driving (with a BAC of .17) while wrestling in the middle of Telegraph Road and was subsequently kicked off the team. In his one year with the Wolverines, the 6-foot-3 point guard averaged 12 points and four rebounds.

Dion Harris – #25, Class of 2003 – The first Harris from Redofrd was the 25th-ranked player in the class of 2003 and was one of the most impressive prospects out of the state of Michigan. The 6-foot-4 guard stayed all four years at Michigan, averaging over 10 points each season. Since graduating, he’s spent the majority of his time playing overseas.

DeShawn Sims – #31, Class of 2006 – After a freshman year in which Sims, the 31st-ranked player in the country in the class of 2006, averaged just 3.4 points and 2.3 rebounds a game, some proclaimed Sims a bust. But in his last three years as a Wolverine, his numbers improved each year. By his senior year, he averaged 17 points and eight rebounds per game. Last year, Sims was named the NBA Development Rookie of the Year, averaging over 20 points per game for the Maine Red Claws.

Dommanic Ingerson – #42, Class of 2001 – Ingerson, a 6-foot-4 guard, came to Michigan as the 42nd-ranked player in the nation. After a freshman season in which he scored 8.1 points per game and shot 42 % from the field, his future looked bright. But at the beginning of his sophomore season, Ingerson left the program and transferred to San Francisco University. Ingerson most recently made headlines last December, when he tried to swim naked across a lake in an attempt to escape from police after being accused of robbery. Shockingly, he was caught and eventually sent to a psychiatric hospital for evaluation.

Corperryale “Manny” Harris – #42, Class of 2007 –  Harris came to Michigan from Redford High School as Mr. Basketball and the 42nd-ranked player in the nation. From the get-go, Manny was the go-to guy for the Wolverines. He averaged 16 points and four rebounds as a freshman and led Michigan to an unlikely tournament berth as a sophomore. He bolted for the NBA after his junior season and signed with the Cleveland Cavaliers, even starting a few games as an undrafted free agent.

Jamal Crawford – #46, Class of 1999 – At # 46, Crawford wasn’t ranked nearly as high as Gaines or Blanchard, but he captivated fans with his impressive play early on. He scored 27 points in a thrilling 104-97 loss to Duke and Michigan students donned headbands to games in his honor. His career came to a frustrating halt when he was suspended by the NCAA for improper benefits back home in Seattle. He entered the NBA Draft and was a top 10 pick, now playing for the Atlanta Hawks where he averaged 15 points per game last seaosn.