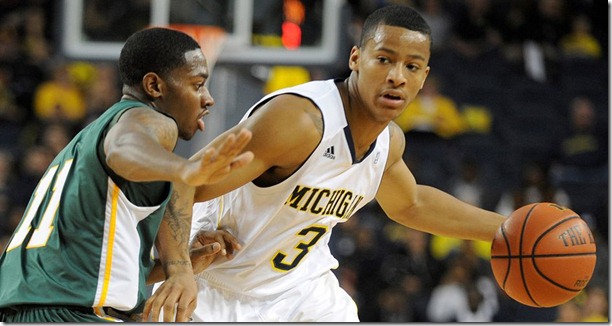 Luckily this game was just a dress rehearsal. Playing its first game with a freshman point guard in a newly renovated Crisler Arena, nothing seemed to go smoothly for Michigan. From the game on the court, to the scoreboard lacking any stats, everything was just slightly misaligned. The lack of any stats throughout the game might have made the game slightly more tolerable because the post game box score is tough to digest.

Michigan seemed to make every mistake that it could, turning the ball over (14), missing free throws (4-12), missing shots (42% eFG%) and getting outrebounded (65% defensive rebounding rate) by a smaller team. Exciting plays, let alone highlights, were rare and the Wolverines never managed to string together any consistent series of positive offensive possessions. Michigan looked like a team that could use every last hour of practice before its season opener next Friday. The Wolverine defense was good, good enough to hold an offensively challenged Wayne State squad to a meager .64 points per possession.

It’s worth noting that despite the Warriors cutting the lead to four points with 12 minutes to play, the result never truly felt in doubt. However, the four factors prove just how ugly this game was:

We’ll stick to team bullets and player bullets for the exhibition game, first some macro thoughts:

Obviously Michigan isn’t that bad of an offensive team. In the 2010-11 season, the Wolverines rolled through exhibition play before falling flat on their faces in Orlando. Winning an easy exhibition game tells you about as little as winning an ugly one. John Beilein and his staff will be the first to tell you that Michigan needs to play better basketball but there’s no better time to have a performance like Friday night’s than an exhibition opener.