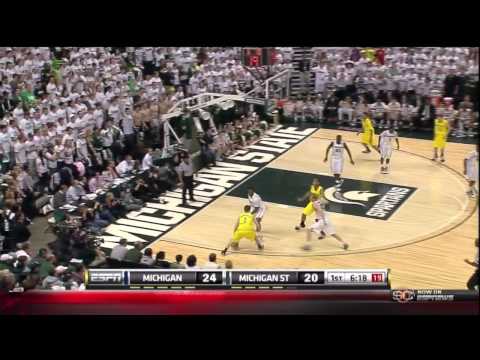 Carlton Brundidge was the ninth man on Friday and headlines the bench group that could play a role in the upcoming season. With foul trouble, injuries and shooting slumps, anyone in this group could become an important contributor at any moment. For example, Colton Christian’s shot clock buzzer beating jump shot in East Lansing was one of the biggest shots of the season for Michigan. This is also a group where John Beilein could plan to the future look to use a redshirt. Here’s a closer look at Carlton Brundidge, Blake McLimans, Max Bielfeldt, Colton Christian, Eso Akunne and Sai Tummala.

Brundidge didn’t get much of an opportunity in Michigan’s exhibition game, playing just two minutes, so it’s tough to judge how his role may play out this season. An undeniable talent, Brundidge’s game is predicated on attacking the basket with the ball in his hands — a trait that the Michigan backcourt is mostly lacking. He’s been working on developing his point guard skills, a position that he has rarely played up to this point in his career. He’s perfectly suited to play a microwave type role off of the bench, providing a spark of energy to the Wolverine offense. That being said, Michigan coaches might prefer to use a taller, stronger and more experienced shooter like Vogrich in that role.

Last year McLimans was the shooting big man that couldn’t shoot, making one of 19 three point attempts on the season. He has a relatively smooth and quick release, and is reportedly an extremely consistent shooter in practice. Whether it’s a case of the yips or the game moving too fast in live action, McLimans needs to find that three point stroke in games if he wants to make an impact. His offensive and defensive rebounding numbers are both underwhelming for a 6-foot-11 player and his style of play is almost best suited for the four position in Michigan’s offense.

If McLimans is the oversized four man, Bielfeldt is the stereotypical undersized five. Max is officially listed at 6-foot-8, 240 pounds, but reports out of high school are that his height could be ever so slightly exaggerated. Every Michigan player will tell you that his strength is far from exaggerated. Bielfeldt plays like Beilein wants a five to play, setting screens, rebounding and with the ability to hit a mid range jumpshot. I’m not sure where he fits in the front court mix with Morgan, Smotrycz, Horford and Novak involved but perhaps he’s a guy that Michigan looks too for a more physical style of play. On the other hand, John Beilein hasn’t denied that he could look to redshirt someone this season and Bielfeldt could be a potential candidate.

Christian was a rebounding specialist at the four position last year when Novak and Smotrycz were unavailable. Christian did a good job on the boards in limited time, grabbing 22 percent of opponent misses and 13 percent of Michigan’s misses, but he was anemic offensively. Christian made just two shots all season – from inside, outside or the free throw line – one of which happened to be this:

Christian spent the summer playing in China with Athletes in Action and could see spot duty for his rebounding once again but, similar to McLimans, he’ll need to prove himself offensively to make any progress up the depth chart.

Akunne, a 6-foot-3, 220 pound guard, is now a junior and has the ability to play various spots in the Michigan backcourt in a pinch. He’s not a prototypical fit for any one position but reports are that he’s been productive in practice. If Michigan has to go deep in the bench, he’s a more experienced backcourt option than Brundidge but his ceiling is also a bit lower.

A walk-on from Arizona, Tummala should help improve the quality of practices. He’s 6-foot-7 and likely would have had several low to mid-major or Ivy League opportunities had he not chosen to walk-on at Michigan. As a freshman, it’s still unlikely that he plays meaningful minutes this season.